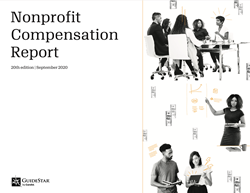 Now in its 20th edition, Candid’s 2020 Nonprofit Compensation Report remains the only large-scale analysis based entirely on IRS data.

Jenna Allen, senior data services analyst at Candid, said, “Accurate, complete, and authoritative information on the social sector is more important than ever. Our 20th annual Nonprofit Compensation Report continues to be the most comprehensive nonprofit compensation study available. This year, we’ve updated the report’s official name and fully automated the data. At Candid, we remain committed to providing the latest information to support excellence throughout the social sector.”

The 2020 Nonprofit Compensation Report shows that there are still significant differences between the compensation of males and females, but it also revealed a continuing trend. Between 2017 and 2018, the percent of women leading organizations increased in six of the nine budget groups and remained the same in the other three groups. With one exception, however, the size of the female CEO pay gap remained the same or even increased from 2017 to 2018.

Other findings from the 2020 report include:

About Candid
Every year, millions of nonprofits spend trillions of dollars around the world. Candid finds out where that money comes from, where it goes, and why it matters. Through research, collaboration, and training, Candid connects people who want to change the world to the resources they need to do it. Candid’s data tools on nonprofits, foundations, and grants are the most comprehensive in the world. Foundation Center and GuideStar joined forces to become Candid, a 501(c)(3) nonprofit organization. Find out more at candid.org and on Twitter @CandidDotOrg.