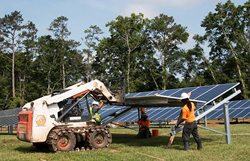 Metro Atlanta-based Cantsink has been named by Solar Power World as the #1 Manufacturer Installer on the magazine’s annual ranking of U.S. solar companies.

Produced annually, the Top Solar Contractor’s list celebrates the achievements of U.S. solar developers, subcontractors and installers within the utility, commercial and residential markets, ranking contractors by kilowatts installed in the previous year.

“Solar Power World is very excited about the 2018 class of Top Solar Contractors,” said Kelly Pickerel, the magazine’s editor in chief. “Our 2017 list showed impressive installation numbers after 2016’s huge rush to meet ITC requirements, and many companies were hesitant to show unavoidable installation dips after last year’s high. We’re happy to feature a strong group of thriving U.S. solar installers on the 2018 Top Solar Contractors list. These companies truly are at the top of their markets.”

Cantsink, which manufactures and installs piling systems that secure ground-mounted solar installation equipment and solar racking systems (branded through its Brilliant Rack division), is a net-zero-energy operation powered with solar energy. The company is celebrating its 30th year in business and just completed a significant expansion.

Patrick Hutchinson, CEO of Cantsink, said he is delighted to see the Cantsink team honored with recognition by Solar Power World as one of the nation’s Top Solar Contractors and Georgia’s #1 Solar Contractor.

“I am proud of the excellent work our Cantsink solar division does and honored that our work is recognized among the nation’s most sought-after solar companies. Being named #1 Manufacturer Installer is a dream come true,” Hutchinson said. “From our first day in business 30 years ago, we have focused on quality, expertise and customer service in every aspect of our work. To be engaged in this emerging solar market is exciting and we remain committed to its ongoing growth and vitality.”

About Cantsink
Cantsink is a piling manufacturing company trusted throughout the nation to supply innovative, strong and cost-effective helical piles. Now celebrating 30 years in business, we have been in the helical pile industry since 1988 innovating piles for a wide variety of structures. Building on our pioneering experience in solar as a net-zero-energy facility, Cantsink leveraged that expertise to become a recognized national leader in the fast-growing solar industry. In 2013, Cantsink began manufacturing racking systems for ground-mounted solar and formed its branded racking system, Brilliant Rack, in 2014. Expertise and innovation have made Cantsink a trusted provider of helical piles for 30 years and a leader in the growing solar industry. For more information, visit http://www.cantsink.com.

About Solar Power World
Solar Power World is the leading online and print resource for news and information regarding solar installation, development and technology. Since 2011, SPW has helped U.S. solar contractors – including installers, developers and EPC’s in all markets – grow their businesses and do their jobs better.