“The Politics of Deception: Target America” from Christian Faith Publishing author Capt. John Pulsinelli, USN (ret) is an illuminating read that addresses pressing issues in America regarding the deceptions in politics that has happened over decades. 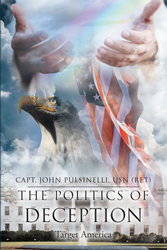 “The Politics of Deception: Target America”: a compelling look into the truths behind the deceptions American citizens have been through despite the warnings woven in God’s scriptures and voices of spiritual leaders. “The Politics of Deception: Target America” is the creation of published author Capt. John Pulsinelli, USN (ret), a career intelligence officer with forty-six years’ experience. He has served with the Office of Naval Intelligence, Defense Intelligence Agency, and Central Intelligence Agency.

Capt. Pulsinelli, USN (ret) shares, “The Politics of Deception: Target America addresses the age-old subject of deception in politics as it has occurred throughout our nation’s history with warnings we have received through scripture and iconic spiritual leaders and others concerning its menacing presence.

“Never has its presence in our domestic and international political environments been so apparent and pervasive. The hostile and polarizing state of those environments is the result of decades of deception, corruption, influence peddling, and espionage to support the infiltration and subversion of our government, educational and religious institutions, and society. It is much more apparent since the 2016 presidential election that we are witnessing a resurgence of the radical Left. Their militant secularist and socialist ideology and agenda is being aided and abetted by elements of our own and foreign intelligence services and corrupt establishment career politicians.

“Our nation, culture, and society are in peril. We are currently engaged in an uncivil and unholy war. It’s a war between starkly different political ideologies and visions of America’s future fueled from within and outside our national boundaries by the Bolsheviks, Alinsky disciples, and revolutionaries of the Left. The radical Left with their domestic and international allies are demons of demagoguery and deception and intend on hijacking our presidency, democratic electoral process with the heart and soul of America, and our wealth and freedoms.

“The ideological battle lines between Right and Left, Republican and Democrat, are drawn—right versus wrong, light versus darkness, culture of life versus culture of death, individualism versus collectivism, jobs versus welfare, God and family first versus godless me too first, spirit of Christ versus spirit of the antichrist, American exceptionalism versus American mediocrity, rule of law versus lawlessness, less government versus more intrusive government. The stakes are high, the choices clear. Choose wisely. God bless America.”

Published by Christian Faith Publishing, Capt. John Pulsinelli, USN (ret)’s new book is an important discussion that hopes to save a nation in dire peril. Through words that bring knowledge and awareness, people will realize the presence of deception in politics that continues to affect the nation; and from there, start seeking out the truths of it all.

View a synopsis of “The Politics of Deception: Target America” on YouTube.

Consumers can purchase “The Politics of Deception: Target America” at traditional brick & mortar bookstores, or online at Amazon.com, Apple iTunes store, or Barnes and Noble.

For additional information or inquiries about “The Politics of Deception: Target America,” contact the Christian Faith Publishing media department at 866-554-0919.