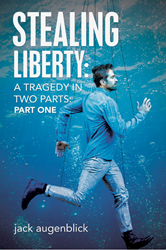 In “Stealing Liberty,” readers will find themselves on a twisting roller-coaster ride of drama and suspense...

Author Jack Augenblick delves deep into the predicament of Oliver Kahan, a young guy from the Bronx, who finds himself – unexpectedly and suddenly snagged – in an out-of-the-blue event.

Antagonists Marc Ripetz and Alex Vadilla are Oliver’s former best friends who rise from the woodwork to unleash intimidation to force Oliver to do an assumed dastardly deed, that is, a mysterious delivery.

In a whirlwind of harsh emotion, Oliver tragically understands a chunk of his personal freedom is being trampled upon. At last resort, he calls upon his grandfather, who is a semi-retired private investigator, to assist on a wild goose chase in Manhattan.

Also, on Oliver’s plate: he must consider whether to get hitched; or allow his girlfriend’s parents to bully him into a marriage proposal.

Antagonists Alex and Marc seem to have big plans once their mysterious package is delivered. Readers should look out for “Stealing Liberty: A Tragedy in Two Parts: Part Two” where unanswered questions become answered.

Part comedy, part tragedy, readers are in for a chilling journey as Oliver decides whether to give in to intimidation while preventing any mortal harm to his girlfriend, parents and himself. In “Stealing Liberty,” readers will find themselves on a twisting roller-coaster ride of drama and suspense, riding this ride with relatable and colorful characters.

About the author
Jack Augenblick works in the financial services industry and lives in Queens, New York with his wife. A former Bronx resident who ran ice cream deliveries across Manhattan as a high school student, Augenblick draws inspiration from his previous home to draw a vivid setting for readers in the book. Stealing Liberty: A Tragedy In Two Parts: Parts One and Two are Augenblick’s first books.