Participants in Shelby Living magazine's annual Best of the Best competition have just voted Ernest McCarty Ford the area's best new car dealer for the sixth year in a row. 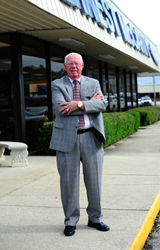 People here are making a strong statement by voting for us again this year as the best dealership.

Shelby Living magazine recently named Ernest McCarty Ford as the region's best new car dealer, as part of its reader-selected annual Best of the Best awards contest. The Ford dealership has won this distinction every year since the competition began in 2010.

The new car dealership was among four area auto firms which made it to the finalist ranking. Thousands of votes were cast in 2016's contest covering a wide range of businesses, services and non-profit offerings including best breakfast spot, caterer, library, medical practice and realtor among other categories.

"People here are making a strong statement by voting for us again this year as the best dealership," said Ernest McCarty, owner of the Ford dealership. "I believe it's our personal approach to car buying as much as the vehicles we sell. Whether you're buying a car or bringing one to our service department, you will always work with the same person from start to finish."

McCarty also credited the dealership's success to the relaxed, low-pressure sales approach. "We don't want our customers to feel like they're being pressured to buy now," McCarty said. He added that the business never charges its customers a document, preparation or delivery fee. Due to its location, the sales tax is lower compared to the higher rates charged by other area dealers.

McCarty said that the Ford dealership also differentiates itself by not marking up the special 'buy' rates it receives from banks, but instead passes the difference to customers for a lower monthly payment. According to McCarty, these subtle considerations come into play when Shelby Living voters repeatedly select the car dealership among the Best of the Best.

Ernest McCarty Ford serves Alabaster, Ala., and surrounding communities of Birmingham, including Bessemer and Chelsea. The dealership sells and services new and used Ford cars, SUVs, and pickup trucks. In addition, the dealership also specializes in fleet and commercial products. The sales team at Ernest Marty Ford is known for their low pressure, no hassle sales process.