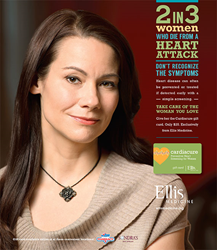 Through research, Smith & Jones knew that the majority of women put their families, friends and careers ahead of themselves, and as a result, neglect making appointments for preventive health services.

Healthcare marketing agency Smith & Jones won Judge’s Choice in the 2014 CardioVascular Advertising Awards for its work on Ellis Medicine’s Women & Heart Disease Campaign. The award was given in the Total Advertising Campaign category and 300-499 bed group.

The CardioVascular Advertising Awards is the top program in the country that recognizes outstanding excellence in advertising related to cardiac and/or vascular services.

The Women & Heart Disease Campaign created by Smith & Jones for Ellis Medicine was an integrated wellness campaign that educated women on the dangers of heart disease while offering a unique preventive screening. Ellis Medicine was the only medical system in the area that offered this specialized heart screening program just for women.

Through research, Smith & Jones knew that the majority of women put their families, friends and careers ahead of themselves, and as a result, would neglect making appointments for preventive health services. Because of this, the agency knew that informing women of the symptoms of heart disease wouldn’t be enough. So rather than asking women to take care of themselves, they asked the community to take care of the women they love by giving them a pre-paid heart screening in the form of a Cardiacure Gift Card.

This messaging was delivered in both on- and offline media channels, including: in-stream video, display, Facebook Newsfeed, Facebook video, television, print, radio and shopping cart ads that drove to a custom campaign landing page.

About Smith & Jones
Smith & Jones is a healthcare marketing agency based in Troy, NY, that specializes in hospital systems and large physician practices. Learn more at smithandjones.com.