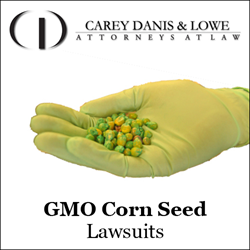 GMO corn cases filed across the United States, and targeting Swiss biotechnology company, Syngenta, are in the process of being consolidated in a Kansas federal court for pretrial proceedings. The consolidated case is In Re: Syngenta AG MIR 162 Corn Litigation, MDL No. 2591 in the U.S. District Court for the District of Kansas.

Management of the Syngenta GMO corn multidistrict litigation (MDL) has been handed over to U.S. District Judge John W. Lungstrum.*

Carey Danis & Lowe believes that the Judicial Panel on Multidistrict Litigation (JPML) made a sound decision in ordering Syngenta GMO corn lawsuits to be centralized in one court. In the JPML's transfer order, a reason given for ordering the centralization is to avoid redundant research and evidence gathering, the possibility of varying pretrial rulings, and overuse of defendant and plaintiff resources.

In all, the centralization of the Syngenta lawsuits will lead to an organized and efficient legal process, which is best for all parties involved, say Carey Danis &amp; Lowe class action attorneys.