Carl Nicks's new book “Deception Down Under" is about a student pilot on the Space Coast of Florida, who is lured into smuggling drugs

Page Publishing author Carl Nicks’s new book “Deception Down Under" documents how a student pilot is lured into smuggling drugs into the country for a powerful Columbian cocaine cartel out of Miami. This young man went from a young naïve college student, studying aviation management to a full-time pilot for a Columbian cocaine cartel which paid him very well to smuggle drugs into the U.S. from the Bahamas in a twin-engine airplane. 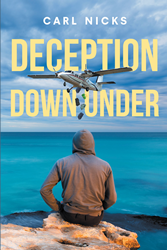 Carl Nicks, a devoted father, has completed his new book “Deception Down Under": riveting tale where the initial glamour and power of the drug world deceived a young pilot, until he is arrested and set up to look like a witness against the cartel by a testimony fabricated by his co-defendant.

Nicks writes, "The book is being written to describe the upheaval that occurred in this young man’s life through the use of drugs and the importation of drugs into this country, successfully utilizing the multi-level marketing network which he had developed. It also describes the awesome task of re-entering his former life, now carrying additional baggage, and the struggle he faces in assimilating a real life. His story is a powerful testimony for others to learn from, because so many people in today’s world are vulnerable to the deception of “easy money,” whether in the drug culture on Wall Street or main street. It is also a compelling adventure story from the standpoint of someone recreating a life for himself and then being allowed to live it. The underlying theme of the story is that “You cannot live a lie. You cannot discover your own reality until you go back and reweave the fabric of your life.”

Published by Page Publishing, Carl Nicks’s gripping work delves into how a pilot was lured into drug smuggling in 1984 in Florida at a well-known surf spot in the “Space Coast” called Sebastian Inlet. It all seemed so simple and he was living in a utopia world not thinking he was ever going to get caught. It was not until after making a lot of money, and acquiring a glamorous lifestyle that everything did fall apart and he was trapped between the cartel and the law.

Afraid for his life, he decided to adopt a new identity and escaped from America to start another life for himself in Australia. He fled to Australia where he re-established himself and built a new exotic life in Queensland on the Gold Coast. The large frontier Down Under is a new test of all of his will to survive on his own in a foreign country where he is a total stranger.

As a result of intensive surveillance, monitoring his parents mail, and phone taps, the F.B.I. uncovered his deception. He eventually was placed on the F.B.I.’s Top 10 Most Wanted list and was tracked to Australia where he was eventually deported to Hawaii, and later deported back to the mainland of the United States to face drug charges and accept the reality of incarceration. Once imprisoned, he builds an inner strength and knowledge of life that changed him forever. All of these scenarios combined formed a barrier which was very difficult to overcome. In addition, it destroyed the life which he was meant to have as a respected professional and placed overwhelming anxiety and emotional strain on his family.

Readers who wish to experience this thrilling book can purchase “Deception Down Under" at bookstores everywhere, or online at the Apple iTunes Store, Amazon, Google Play, or Barnes and Noble.