A portion of every purchase will be donated to The Milagro Foundation, helping children in need throughout the world 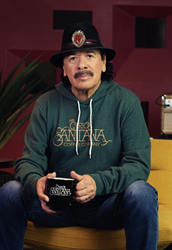 Carlos Santana, the ten-time GRAMMY Award-winning guitarist and philanthropist has launched The Carlos Santana Coffee Company with a joint mission: to serve fans and friends around the world the most divine and meaningful cup of coffee while helping children in need throughout the world through his The Milagro Foundation.

Throughout his life, Carlos has been committed to giving back. So, in 1998, he created The Milagro Foundation with the mission of helping young people, especially in underprivileged communities both across the globe and here in the U.S. A portion of every purchase of The Carlos Santana Coffee Company coffee and merchandise is donated to The Milagro Foundation, which makes grants to organizations that support underserved and vulnerable children in the areas of education, health and the arts. These proceeds will work to enrich the lives of youth, break down barriers to their success, and help end cycles of poverty.

“We believe that life is a miracle and that children everywhere deserve the opportunity to lead safe, healthy and educationally creative lives,” says Carlos Santana. “It is an honor to partner with Icon Global Coffee and with each cup of coffee, make a significant difference in the world. And as we say ‘Wake up and smell the future!’”

To bring The Carlos Santana Coffee Company to market, Santana partnered with Icon Global Coffee Company and their 90-year-old fourth generation importer, roaster and packaging company. Each roaster is a member of the Roasters Guild of the Specialty Coffee Association of America (SCAA) and has at least a decade of experience, ensuring that each cup brewed will produce the rich, intense flavors one would expect from a specialty coffee.

Icon Global Coffee Company CEO Greg Ousley says, “All of us at Icon Global Coffee Company are humbled and proud to partner with Carlos Santana, his family and the entire organization as well as The Milagro Foundation. Coffee is a global business and touches and impacts billions of people’s lives each day. Carlos is a global ambassador of peace, unity and divinity. Together we will all make a difference, spread hope and create positive change. Through support of The Carlos Santana Coffee Company, fans, followers and friends can have “Coffee with Carlos” and we can change the world together.”

A Coffee Club subscription service is also available, allowing customers to schedule deliveries of fresh-roasted coffee straight to their door. Never worry about running out of coffee again, and contribute to consistent change through the Milagro Foundation. Like Carlos always says, it’s time to wake up and smell the future.

Visit the store to learn more about the vision and browse the coffees.

About Carlos Santana:
Coming off the celebration of two epic milestones in 2019 - the 20th anniversary of his groundbreaking album Supernatural and the 50th anniversary of his legendary performance at Woodstock - Carlos Santana now celebrates the 50th anniversary of his masterpiece Abraxas in 2020. To date, Santana has won ten Grammy Awards and three Latin Grammys, with a record-tying nine Grammys for a single project for 1999’s Supernatural (including Album of the Year and Record of the Year for “Smooth”). He has received the Billboard Century Award (1996), was ushered into the Rock and Roll Hall of Fame (1998), received the Billboard Latin Music Awards’ Lifetime Achievement honor (2009), and was the recipient of the Kennedy Center Honors Award (2013). Among many other distinctions, Carlos Santana has been cited by Rolling Stone as #15 on their list of the “100 Greatest Guitarists of All Time;” and has joined the Rolling Stones as one of only two bands to have an album reach the Top 10 in every decade since the 1960s. In 2018, he released his first MasterClass. In it he teaches the art, heart, and soul of guitar, reaching deep into the spirituality and tonality of his playing to help students become more authentic and expressive artists. In June of 2019, inspired by the sounds and rhythms of Africa, Santana released the powerful, energy-infused full-length album Africa Speaks, which NPR called his “best record in decades” (NPR) and The New York Times ranked among "the fiercest albums in Santana’s 50-year career.”

About Icon Global Coffee Company:
Icon Global Coffee Company is a global specialty coffee company with a passion for making great coffee and a difference. Icon Global Coffee Company has over 90 years of experience as importers, roasters and packagers of fine coffees from all around the world. Following extensive research of the global coffee industry they recognized that there was and is a tremendous opportunity to create a turnkey “Crop to Cup” solution that rewarded supply chain efficiencies and enabled them to make a difference, change lives and communities for the better. Their extensive knowledge of roasting techniques allows constant evolution, refining their specialty coffee offerings, which differentiates them from all brands in the industry. IGCC is positioned to become a market leader and premier online global coffee company. We invite you to join us and together, we can change the world “One sip, One Cup and One Community at a Time”.