Music Producer Carmen Verderosa, owner of Woodrock Studios LLC, will be remembered by N.J. musicians, family and friends in a tribute radio broadcast that will air on WDVR-FM 89.7 hosted by DJ Andy Kin on April 21, 6-8 p.m. 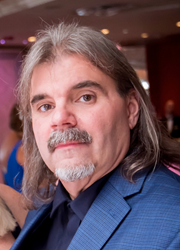 “We remember Carmen Verderosa. Music was his passion and his vocation… He was a huge supporter of local music, welcoming every musician into his studio.” - Governor Phil Murphy

Musicians representing 15 acts from New Jersey will perform in a tribute radio broadcast on April 21 to honor Carmen Verderosa, an accomplished sound engineer, music producer and owner of Woodrock Studios LLC. Verderosa of Lebanon, N.J. was 54 years old when he passed away from Covid-19 in February.

The show will broadcast on WDVR-FM 89.7 hosted by DJ Andy Kin from 6-8 p.m. on April 21 and will stream on http://www.wdvrvolunteers.org/live.

The tribute will feature original songs written and produced by Verderosa, and performances by several of the bands he loved representing a range of music genres including solo acoustic, R&B, metal and rock. Band members and Verderosa’s wife Kathy Pettigrew Krautsieder will add their personal stories about his humor, and the creativity and dedication he brought to every recording session.

A strong advocate for the local music scene, family, friends, and the community remember Verderosa for his talent, generosity and “corny jokes.”

“Carmen and Kathy made you feel like you were part of their family. Nothing was too much trouble, expert attention to our musical needs and most of all the warmth as we walked through those magical studio doors,” said Annie Haslam from Renaissance. “And the laughter! Some of his jokes were funny, most weren't, but the way he told them made them so! He loved life, Kathy, music and all who graced his studios with a passion! A good soul.”

Donald Guillaume (former drummer for the Fugees) said, “One of the songs I recorded at Woodrock called ’Warmup’ is with 12-year-old Lil Asmar. Carmen was a joy to work with on this project, and all the other projects that we've worked on together. Will truly miss him.”

In a March 8 press conference, New Jersey Governor Phil Murphy honored Verderosa, “We remember Carmen Verderosa. Music was his passion and his vocation… He was a huge supporter of local music, welcoming every musician into his studio.”

Woodrock Studios is a premier recording and rehearsal studio in Raritan, New Jersey. It offers four rehearsal studios to accommodate any band no matter the size or genre. A live room and control room are well-equipped with digital and analog gear, providing an ideal creative environment to produce the best recording and mixing sounds possible. For more information, visit http://www.woodrocksound.com.