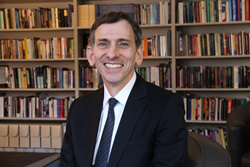 Throughout his career as an educator Joel H. Rosenthal has worked with academic and professional constituents to bring ethical analysis to matters of international public policy.

On March 29 2019, Joel H. Rosenthal, president of Carnegie Council for Ethics in International Affairs, will receive the Distinguished Scholar Award at the International Studies Association (ISA) Conference in Toronto.

The ISA's Distinguished Scholar Award is given for life achievement in International Studies. Typically, nominees will have made major contributions to scholarship in the field both via their own research and writing and their mentorship of others.

Joel H. Rosenthal has served as president of Carnegie Council for Ethics in International Affairs since 1995.

As a scholar and teacher Rosenthal has focused on ethics in U.S. foreign policy, with special emphasis on issues of war and peace, human rights, and pluralism. His first book "Righteous Realists" is a study of Hans Morgenthau, Reinhold Niebuhr, and George Kennan, among other American realists. His edited volume "Ethics & International Affairs: A Reader," co-edited by Christian Barry, is a compilation of essays from major figures in the field and is widely used in college and university courses.

In 2016, Rosenthal was appointed Dorsett Fellow at Dartmouth College where he delivered a lecture on "Rising Fences: Migrants, Borders, and a New Frontier for Ethics." In 2019 he will deliver the McMurrin-Tanner Lecture at the University of Utah on "Ethics for a Connected World."

Throughout his career as an educator Rosenthal has worked with academic and professional constituents to bring ethical analysis to matters of international public policy. In doing so he has worked with partners in scholarly associations, colleges and universities, grant-making foundations, government, business, and the media.

Rosenthal received his Ph.D. from Yale University and B.A. from Harvard University. In addition to his ongoing teaching duties, he lectures frequently at universities and public venues across the United States and around the world. In 2013 he received an Honorary Degree of Doctor of Social Science from the University of Edinburgh.

About International Studies Association
Representing over 100 countries, ISA has more than 6,500 members worldwide and is the most respected and widely known scholarly association in this field. Endeavoring to create communities of scholars dedicated to international studies, ISA is divided into 6 geographic subdivisions of ISA (Regions), 29 thematic groups (Sections) and 4 Caucuses which provide opportunities to exchange ideas and research with local colleagues and within specific subject areas. Go to https://www.isanet.org/.

About Carnegie Council
Founded by Andrew Carnegie in 1914, Carnegie Council for Ethics in International Affairs is an educational, nonprofit, nonpartisan organization that produces lectures, publications, and multimedia materials on the ethical challenges of living in a globalized world. Go to https://www.carnegiecouncil.org/.