The Foreign Policy Research Institute announces the election of Carol Rollie Flynn as its President. 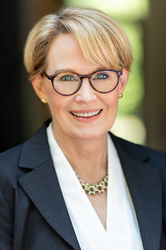 “I am deeply honored to have been selected by the FPRI Board as its next President. FPRI is a remarkable organization whose steadfast commitment to quality and scholarship has been a hallmark since its founding many decades ago."

The Foreign Policy Research Institute is pleased to announce the election of Carol Rollie Flynn as its President commencing January 1, 2020.

“I am deeply honored to have been selected by the FPRI Board as its next President. FPRI is a remarkable organization whose steadfast commitment to quality and scholarship has been a hallmark since its founding many decades ago. It is an organization with a stellar past and an even more promising future, due in large part to the exceptional leadership of its current President Alan Luxenberg, an excellent staff, and an outstanding group of scholars,” said Ms. Flynn.

Ms. Flynn is currently an adjunct Professor at Georgetown University’s School of Foreign Service/Security Studies Program where she has co-directed the National Security Critical Issue Task Force, which has conducted research on Lone Wolf Terrorism, Countering Violent Extremism, and Insider Threat. She has also taught at the Fordham University Graduate School of Business and serves as Adjunct Staff at Rand Corporation. A member of the Council on Foreign Relations, Ms. Flynn has a B.A. from Wellesley College and an M.S. in Cyber Security from the University of Maryland/University College. She is a member of the Advisory Board of the International Spy Museum and on the Board of the Holy Cross Health Foundation.

Ms. Flynn has also been a Senior Fellow in FPRI’s Program on National Security for several years, and is the founder and managing principal of Singa Consulting, a professional services firm.

“Rollie comes to FPRI after serving many years in important management and leadership positions with the Central Intelligence Agency for which she has received the highest praise from her colleagues, and after serving for nine years as an adjunct professor at Georgetown University where she created innovative courses and was admired by colleagues and students alike,” said Robert L. Freedman, Chairman of FPRI’s Board of Trustees.

Ms. Flynn succeeds Alan Luxenberg who is retiring after 44 years of service to FPRI including a very successful nine years as President during which time he greatly expanded FPRI’s activities and reach.

“Rollie is a great patriot, a great leader, and, not least important, a great listener. I am confident that she will take FPRI to new heights in the years ahead, and I couldn't be more pleased” said Alan Luxenberg, President of FPRI.

The Foreign Policy Research Institute is a non-profit, non-partisan think tank located in Center City Philadelphia. It is dedicated to producing the highest quality scholarship and nonpartisan policy analysis focused on crucial foreign policy and national security challenges facing the United States. We educate those who make and influence policy, as well as the public at large, through the lens of history, geography, and culture.