Early registration opens today for the 2021 Memorial May event 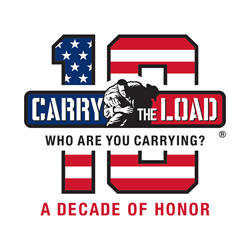 Coming off a year of worldwide sacrifice, people are reflecting on what is important. Carry The Load’s mission of honoring selfless service has never been more meaningful.

Carry The Load, a non-profit that provides active ways to connect Americans to the sacrifices of our nation’s military, veterans, first responders and their families, started in 2011 as a grassroots effort by two Veteran U.S. Navy SEALs who felt like the nation had forgotten the meaning of Memorial Day. A decade later, Carry The Load has turned into a worldwide movement to honor and remember our nation’s heroes.

Reaching 50 states and more than 29 countries, people can register at carrytheload.org/register to join from April 29 through Memorial Day. This year people can participate by hosting a Carry It Anywhere experience, organizing a youth Carry The Flag activity, walking in the National Relay, attending a City Rally, fundraising for our nation’s heroes, and taking part virtually throughout the 32-day event.

“After serving on active duty post-9/11, many of us returned home having lost good men and women whom we served alongside,” says Stephen Holley, co-founder, president and CEO of Carry The Load. “We returned home to what felt like a nation that didn’t care. By walking alongside and sharing stories with hundreds of supporters over the past 10 years, we’ve come to realize people do care.”

In addition to being an outlet for emotional healing, Carry The Load raises much needed funds to assist with the many challenges facing our military, veterans, first responders and their families. Peer-to-peer fundraising goes toward recovery services, such as counseling, adaptive training, suicide prevention, job placements, home improvements, educational scholarships for children of the fallen, and many other services.

“The support by our partners and their employees helps ensure that Carry The Load can live out its dedication to honor and remember our nation’s heroes,” says Holley. “Coming off a year of worldwide sacrifice, people are reflecting on what is important. Carry The Load’s mission of honoring selfless service has never been more meaningful.”

ABOUT CARRY THE LOAD
Carry The Load is a 501(c)3 nonprofit founded in 2011 by veteran U.S. Navy SEALs Clint Bruce and Stephen Holley. Carry The Load's mission is to provide an active way to honor and remember our nation’s heroes by connecting Americans to the sacrifices made by our military, veterans, first responders and their families. For more information, visit http://www.carrytheload.org. Like us on Facebook and follow us on Twitter, Instagram, LinkedIn and YouTube.