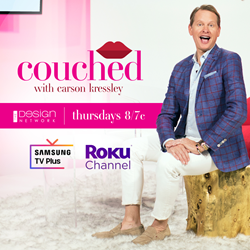 The Design Network has teamed up with Emmy-winning television star, celebrity stylist, designer, and best-selling author Carson Kressley to launch the first-ever talk show about all things interior design, Couched, on Thursday, January 9, 2020.

The series’ guest-list is a who’s-who of the design-industry’s most-loved stars, including Love it or List It’s Hilary Farr, celebrity designer and Kressley’s former Queer Eye For the Straight Guy co-star Thom Filicia, and designer-to-the-Kardashians Martyn Lawrence Bullard. The show format is a mix of dishy interviews, game show-inspired contests, and insider advice.

“We’re incredibly excited about the first season of Couched,” said Jason Harris, founder of The Design Network. “Our guest list is truly remarkable, and each one brings the perfect mix of entertainment and information to the couch. And of course, with Carson Kressley hosting, there is literally never a dull moment!”

Kressley, who partnered with The Design Network on a 2017 mini-series called Dressing Rooms, says “I love to talk and I love design! So when The Design Network asked me to host a design talk show for them, I jumped at the chance. It’s so fun getting to talk design with my design crushes and celebrity friends!”

Couched was taped in front of a live studio audience at Furnitureland South, the world’s largest furniture store, in High Point, North Carolina. It was filmed during High Point Market, the largest furnishings industry trade show in the world.

The 10-episode series airs on Thursdays at 8/7c on Samsung TV Plus and The Roku Channel. Episodes will also be available to stream on demand via Apple TV, Roku, Amazon Fire, YouTube, TDN.TV, and via native iOS and Android apps.

TDN programs are currently streamed for more than 350,000 hours each month on the world’s biggest platforms, including Apple TV, Roku, The Roku Channel Samsung TV Plus, Amazon Fire, YouTube, TDN.TV, and via native iOS and Android apps.

Carson Kressley is an Emmy-winning television star, celebrity stylist, New York Times Best-Selling author and designer. In 2003, he became a breakout star as the fashion savant on Bravo's Emmy-Award-Winning Queer Eye for the Straight Guy, and later revolutionized America's personal fashion sense as he filmed OWN Network's Carson Nation. He’s appeared as a host, judge, contestant or contributor on dozens of television programs including Good Morning America, Live with Kelly, The Wendy Williams Show, The Oprah Winfrey Show, RuPaul’s Drag Race, The Celebrity Apprentice, How to Look Good Naked, and Dancing with The Stars.

Carson is a New York Times best-selling author with three books to his credit, including You're Different and That's Super, and Off The Cuff: The Essential Style Guide for Men and The Women Who Love Them. His latest book, a women's style guide Does This Book Make My Butt Look Big? A Cheeky Guide to Feeling Sexier in Your Own Skin & Unleashing Your Personal Style was released on October 11, 2016 [St. Martin's Press] to rave reviews.

A strong supporter of many philanthropic causes, Kressley uses his celebrity to advance different concerns such as The Trevor Project, The Human Rights Campaign, AIDS WALK, and the Al D. Rodriguez Liver Foundation. Kressley is also a trustee on the board of The True Colors Fund, The American Saddle Bred Museum and Philadelphia University. When Kressley is not starring on stage or screen, he can be found astride one of his American Saddlebred show horses, with which he has achieved World Champion status.