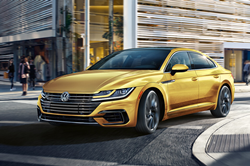 Having only launched in the United States as recently as April 2019, the Volkswagen Arteon is one of the newest Volkswagen models. The Arteon exists as a successor to the Volkswagen CC and looks and feels like a larger version of the Volkswagen Passat.

The Volkswagen Arteon generally looks like a sedan with its four main side doors, but the Arteon has a unique fifth door. This fifth door is called a “fastback,” by the automaker, but it much more similar to what most drivers will know as a “hatchback.” The fastback hatch door is positioned much like a common sedan trunk but when it opens, the back window goes with it as one unit. When open, it becomes clear how much storage room is in the back of the vehicle. The back seats fold down to increase the already ample storage space, so drivers can store a total of 55 cubic feet of cargo.

Drivers will find the Volkswagen Arteon larger than the Passat. With an EPA estimated interior volume of 123.4 cubic feet, the Arteon is 13 cubic feet bigger inside than the Passat. This does not, however, make the Arteon too big when it comes to cornering since it is slightly shorter, an inch wider and has almost the same wheelbase.

Volkswagen kept the trim level choices concise for the Arteon. Shoppers can find the SE, SEL, SEL R-Line and SEL Premium R-Line on the lot at Carter Volkswagen. All Arteon trim levels on the lot feature Volkswagen 4MOTION® four-wheel drive technology so shoppers in Seattle can make sure to get the most out of the Arteon and its 2.0L 4-cylinder inline turbo engine. This engine gives drivers control of up to 268 horsepower and 258 pound-feet of torque. An 8-speed shiftable automatic transmission lets owners get the most out of the Arteon. Shoppers are encouraged to call 206-782-7474 or talk to a member of the sales staff at 5202 Leary Avenue Northwest Seattle, Washington, 98107.