CasterDepot is once again designated as a Colson Group Platinum Distributor

CasterDepot is once again honored as a Colson Group Platinum Distributor, a designation reserved for only the most elite of Colson Group partners. 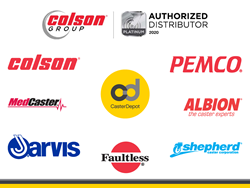 CasterDepot has once again been awarded the exclusive Platinum designation by Colson Group, the largest manufacturer and distributor of caster and wheel products in the world. This designation is awarded to Colson Group’s top performing distributors in areas such as growth, selling effectiveness, relationships and stocked inventory. It is also a recognition that CasterDepot can offer its clients some of the fastest lead times and most competitive pricing on brands such as Colson, Albion, Shepherd, Jarvis, Rhombus, MedCaster, Revvo, Pemco, Faultless and Bassick.

For more than 40 years, the Colson Group and CasterDepot partnership has thrived. Jason Popma, president of CasterDepot, puts it this way, “Colson Caster was the first caster we sold in 1980 and it is still the caster company with the most quality options for our clients.” CasterDepot’s unwavering commitment to providing the best options for their clients is one of the reasons the company has grown into one of the largest Colson Group distributors in the world.

About CasterDepot
Family-owned and operated since 1980, CasterDepot is an ISO 9001 QMS certified caster supplier known for their expertise in the OEM and MRO caster and wheels. CasterDepot’s growing team of roughly 40 employees services over 5,000 clients in the United States, Canada, and Mexico.
For more information, visit http://www.casterdepot.com.