“The Death And Resurrection of the Episcopal Church: How To Save A Church In Decline” from Christian Faith Publishing author Caswell Cooke Jr is an edifying account filled with insights on identifying the crisis within the Protestant churches and how to mitigate its regression through proper leadership and management. 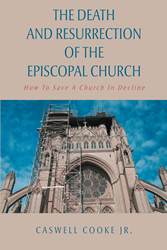 Cooke shares, “In an era where churches in America are in decline, this book offers a clear path and hope for the future. Using the Episcopal Church as an example of a Mainline Protestant Domination that has faced a half century of steep decline, the author shows where the church has gone astray, what has contributed to the continued losses, and a strong critique of the leadership, as well as a way for the people to take back their church and grow it.

“This book is a must have for anyone who truly cares about the future of American Protestant churches, especially the Lutheran, Presbyterian, Methodist and Congregational Churches, which all face the exact same fate.

“This compelling narrative tackles the modern-day issues that divide our country: conservative vs liberal, race issues, sexuality and other third rail controversies that have torn apart the church. Most importantly the book offers real solutions for how the church should deal with them so as to be a big tent for all people.

“Brutally honest, insightful and reflective, this book will be a quick read and easy to implement in your own parish. Nothing coming from the leadership of any of these denominations has worked, so if you care about the future of Mainline Protestants and especially the Episcopal Church, then this is for you!”

Published by Christian Faith Publishing, Caswell Cooke Jr’s new book inspires mental growth concerning the much-needed progress in efficiency and efficacy in contending with the struggles of the Episcopal Church.

This book presents no-holds-barred arguments that desire the renaissance of the Christian faith through the nurturing of the church in the aspect of congregational development and reform of the leadership.

View the synopsis of “The Death And Resurrection of the Episcopal Church: How To Save A Church In Decline” on YouTube.

Consumers can purchase “The Death And Resurrection of the Episcopal Church: How To Save A Church In Decline” at traditional brick-and-mortar bookstores or online at Amazon.com, Apple iTunes store, or Barnes and Noble.

For additional information or inquiries about “The Death And Resurrection of the Episcopal Church: How To Save A Church In Decline,” contact the Christian Faith Publishing media department at 866-554-0919.