CATMEDIA has a Triple Win in the 40th Anniversary of the Telly Awards! 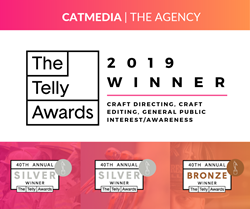 "The DeKalb County Fire Rescue is an outstanding and diverse fire department, that really offers so many opportunities for growth and development to its firefighters, and we wanted to create a video that conveyed that message." Brittany Hester - Director/Producer

CATMEDIA announced today it’s DeKalb County Fire Rescue Recruitment: Answer Your Calling video, has been named Best Online Commercial in Craft Editing, General Public Interest/Awareness, and Craft Directing in the 40th Annual Telly Awards. This will be the fifth Telly Award for CATMEDIA. The Telly Awards honors excellence in video and television across all screens and is judged by leaders from video platforms, television, streaming networks, production companies and including Vice, Vimeo, Hearst Digital Media, BuzzFeed, and A&E Networks.

"CATMEDIA is pushing the boundaries for video and creativity at the time when the industry is rapidly changing,” said Sabrina Dridje, Managing Director of the Telly Awards. “This award is a tribute to the talent and vision of its creators and a celebration of the diversity of work being made today for all screens.”

The full list of the 40th Annual Telly Awards winners can be found at http://www.tellyawards.com/winners.