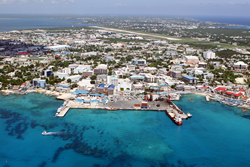 The Cayman Islands attracts investors because it is a transparent, cooperative jurisdiction that already meets or exceeds the full range of globally accepted standards for transparency and cross-border cooperation with law enforcement and tax authorities.

The Cayman Islands continues to be a desirable location to do business, with the number of Grand Cayman-registered companies reaching an all-time high. According to recent statistics released by the Cayman Islands General Registry 106,291 companies were active on the registry as of September 30, 2018. This number has grown steadily since the end of 2017.

Cayman Finance CEO Jude Scott expanded on why he believes investors are attracted to the British Overseas Territory.

“Leading institutional investors are engaged in a flight to quality, moving away from other jurisdictions and investing in the Cayman Islands in growing numbers because we have a strong, diversified financial services industry supported by high standards, a robust legal system and excellence in service,” he said.

“Our legal and regulatory regimes have established Cayman as an efficient and effective neutral hub, enabling parties from around the world who are domiciled in countries that may have differing laws, regulations, tax rules, and customs to benefit from doing business with each other.”

Scott explained the Cayman Islands’ financial services industry provides a number of benefits to investors that they may not be able to find in other financial centres, such as: access to an unparalleled combination of industry-leading sectors like investment funds, insurance, reinsurance, capital markets, banking, and trusts.

“The Cayman Islands attracts investors because it is a transparent, cooperative jurisdiction that already meets or exceeds the full range of globally accepted standards for transparency and cross-border cooperation with law enforcement and tax authorities,” he said.

The Cayman Islands’ economy has been touted as a key factor for investor confidence, with a GDP that grew by 2.8 per cent in 2017 and is projected to be at three per cent by the end of this year. Economists say this growth is partly due to the significant gains in financial services, tourism and construction sectors - the three pillars of the economy.

Dart Real Estate is one developer whose confidence in and commitment to the jurisdiction remains strong, shown by an investment of US$1.5 billion in infrastructure and development projects over the past 20 years with plans to invest in further development over the next several years. This investment includes the continued development of its 685-acre master-planned New Urbanism community, Camana Bay, the expansion of the Cayman International School, the construction of a 60,000-square-foot supermarket and the development of the first for-sale residential community in Camana Bay, OLEA.

President of Dart Real Estate Jackie Doak explained, “Our confidence comes from the direct correlation between the positive economic indicators, such as stayover tourism and increase in demand for attractive real estate offerings. As a result, we have seen growing interest in our properties such as The Residences at Seafire, as well as our commercial spaces for lease at Camana Bay and expect this trend to continue as we move into 2019.”