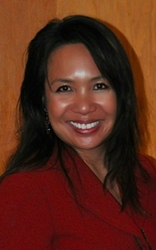 Topics of the conference included access to justice, as well as the 50th anniversary of the Delano grape strikes, which coincided with the event.

“At the September 25th CELA annual conference in Oakland, I had the honor of meeting the Chief Justice, Tani Cantil-Sakauye, who is the first Filipina and only the second woman to serve as the state’s Chief Justice,” said Jaramilla, a past chair and current board member of CELA. “Topics of the conference included access to justice, as well as the 50th anniversary of the Delano grape strikes, which coincided with the event.”

Fifty years ago, Filipino farm workers led by Larry Itliong inspired the movement by agricultural workers to fight for better wages and fair treatment. Thereafter, Mexican farmworkers, led by Cesar Chavez, united with the Filipinos who stood up for their rights. Subsequent boycotts and media attention followed, which then led to the formation of the United Farm Workers Union.

For Jaramilla, whose parents immigrated from the Philippines, this was especially poignant, as her father was a farm worker after he served in WWII. “The struggles of workers, including my father, have inspired me to commit myself to helping the working class and oppressed people,” said Jaramilla.

Other topics of the conference included cultural and gender diversity in the legal profession and on the bench. Attorney Jaramilla noted that it was a highlight of her career meeting and interviewing the Chief Justice, whose photo with Jaramilla from the conference appeared in CELA’s recent newsletter.

About Toni Jaramilla, A Professional Law Corporation
Toni Jaramilla is committed to achieving the best possible results for employees who have experienced problems in the workplace. Serving clients throughout Los Angeles, Jaramilla’s focus is on achieving positive social change for workers. Through zealous and ethical advocacy, lawyers at the firm have built a reputation for excellence in the practice of employment and labor law. For more information, please call (310) 551-3020. The office is located at 10100 Santa Monica Boulevard, Suite 300,
Los Angeles, CA 90067.