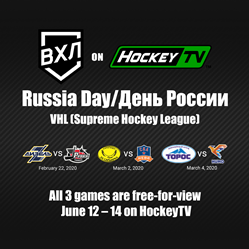 "We are excited to bring world class Russian hockey to our North American audience, most of whom have never seen VHL action"

HockeyTech is proud to celebrate Russia Day (Den' Rossii) by replaying three great playoff games from the Russian Supreme Hockey League (VHL- Vysshaya Hokkeinaya Liga) on HockeyTV. The games will be available for free-for-view starting on Russia Day – Friday June 12th through the entire weekend. Just register for a free subscription at HockeyTV.com to watch the games for free.

The below games were specially selected for HockeyTV fans:

“We are excited to bring world class Russian hockey to our North American audience, most of whom have never seen VHL action”, says HockeyTech CEO Stu Siegel. “This is a great way to kick off HockeyTV’s expansion into broadcasting European professional hockey next season; and what better day to do it than on Russia Day!”

The Supreme Hockey League (VHL) is the second highest level of professional hockey in Russia. The league’s 34 teams span four countries – Russia (27), Kazakhstan (3), China (3), and Uzbekistan (1). The VHL serves in large part as the primary minor league for the Kontinental Hockey League (KHL), essentially making it the Russian equivalent of the American Hockey League (AHL) for the NHL. The games attract over 1.5 million live spectators each season.

About HockeyTV
HockeyTV (HockeyTV.com) is the definitive destination to watch ice hockey. HockeyTV streams over 30,000 live games each season from over 50 leagues. Each game is accessible on demand from a growing library of over 120,000 games. Fans can purchase subscription packages on a monthly or annual basis to get unlimited access to HockeyTV’s extensive action. HockeyTV is a service of HockeyTech (HockeyTech.com), the worldwide leader in hockey related technology, video and information services. HockeyTech – Digitally Powering Hockey.