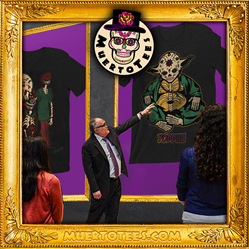 “I aspire to raise t-shirt design to the level of fine art,” says artist Jason Sikes.

These colorful, black & white, and some distressed designs, most all feature a Día de los Muertos (Day of the Dead) vibe. All feature a print of his signature, and soon will be available with hand-written signature in limited edition series. All are available through MuertoTees.com and Amazon by searching “MuertoTees.”

“I aspire to raise t-shirt design to the level of fine art,” says Jason Sikes.

He has worked in acrylic, neon, multimedia, and now is channeling his talent toward transcendent t-shirt design.