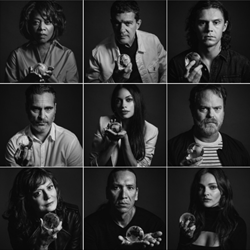 “This is a critical moment in our planet’s history. The changing climate is a global challenge that calls for immediate action. By shifting our individual habits and routines and making choices that have less harmful effects on the environment, we each have the power to confront the climate crisis,”

As they gathered to promote their films at the 44th annual Toronto International Film Festival (TIFF) last week, high-profile personalities were urged to use their voices to shine a spotlight on the global climate emergency.

Beginning today, they will share their photos on social media, each paired with a message describing how they are personally addressing one of the most critical issues of our time. By explaining how their daily actions are helping to reduce their carbon footprints – whether it’s traveling more sustainably, saving energy, or eating less meat – they hope to encourage their followers to join the movement.

As part of the campaign, actor, singer-musician and UNEP Goodwill Ambassador Aidan Gallagher is appearing in an ad featured in a special issue of Variety magazine dedicated to environmental action in Hollywood. Gallagher is challenging his fans and followers to shift to a more plant-based diet and highlighting the power of collective action to confront the climate challenge.

“This is a critical moment in our planet’s history. The changing climate is a global challenge that calls for immediate action. By shifting our individual habits and routines and making choices that have less harmful effects on the environment, we each have the power to confront the climate crisis,” said Barbara Hendrie, Director of UNEP’s North America Office.

“Hollywood is in a unique position to be a source for good and effect positive change,” said Todd Krim, President & CEO of TKG. “We are honored to have brought together best of class organizations and artists to inform the public on the simple actions that they can take now to help save our planet.”

“We are honored to participate in and support this outstanding campaign alongside notable environmental leaders and celebrities in an effort to collectively continue to raise awareness locally and globally about climate change,” said Heather McCrory, CEO, Accor North & Central America. “Our group has a longstanding commitment to sustainability efforts worldwide and we embrace this initiative wholeheartedly as it calls on all to play an active role in preserving and giving back to our planet and our communities.”

To keep the momentum going, additional photos of changemakers will be taken at UNEP’s Champions of the Earth awards ceremony, which will be held on 26 September, during the United Nations’ Climate Action Summit in New York City. From grassroots champions and corporate leaders to political pioneers, the Champions of the Earth award – the UN’s highest environmental honour – recognizes those taking bold action for our planet by transforming economies, shaping new and sustainable technology, and leading political change. The Champions of the Earth laureates will be featured as part of the campaign to highlight their actions to protect our environment and defend our natural resources.

About the United Nations Environment Programme (UNEP)
UNEP is the leading global voice on the environment. It provides leadership and encourages partnership in caring for the environment by inspiring, informing, and enabling nations and peoples to improve their quality of life without compromising that of future generations. UNEP works with governments, the private sector, civil society and with other UN entities and international organizations across the world.
http://www.unenvironment.org/regions/north-america

About The Krim Group (TKG)
TKG is a social impact consulting company that has been connecting celebrities with causes for over 15 years. Headquartered in Los Angeles but with a global footprint, TKG has established partnerships between some of the biggest names in sports, music and entertainment with top international organizations including many UN entities and has brought celebrities on social impact trips around the world to give back. http://www.thekrimgroup.com

About Justin Wu
Justin Wu is an award winning director and photographer from Toronto, Canada. He has shot and directed for global brands and top tier talents from around the world. He is passionately vocal, using his influence to advocate for climate change, diversity, and the LGBTQ+ community. Justin believes that together we can make a big impact with our voices. http://www.justinwu.com