Gender Selection is an emerging infertility treatment option, also known as "family balancing," yet many wonder if this is a justifiable use of advanced technology or one step closer to “designing babies?” To weigh in on this controversial area is Dr. Mark Trolice—infertility specialist, professor of obstetrics and gynecology, author, and former fertility patient. 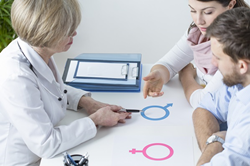 While gender determination can aid in the prevention of a child inheriting genetic diseases linked to a specific sex chromosome, more couples are pursuing this procedure for non-medical and emotional reasons.

Currently, 73% of U.S. fertility clinics offer Gender Selection.(1) Dr. Mark P Trolice, founder of The IVF Center, reports that couples opt to employ this advanced reproductive technology to pursue having a child of a particular gender rather than leaving it up to nature. While gender determination can aid in the prevention of a child inheriting genetic diseases linked to a specific sex chromosome, more couples are pursuing this procedure for non-medical and emotional reasons. And although the concept of sex selection is not without controversary, Dr. Trolice reports such patient requests have caused increased acceptance rates at fertility centers.

Why this sudden popularity? Gender selection can be a valid option for certain scenarios, such as a couple with two daughters from prior marriages who now want a boy to carry on the husband’s family name.(2) Or for a couple with sons seeking to gender select after their only daughter died in an accident. (3) In fact, several high-profile couples recently turned to gender selection, including former Miss Great Britain, reportedly Kim Kardashian and her husband, Kayne West, and Chrissy Teigen and her husband, John Legend. (4)(5) Teigen, while undergoing medical infertility treatment, also opted for gender selection, which adds to about 25% to the total cost. (6)

“There are many ways to establish a family,” counsels Dr. Trolice, who offers patients empathy based on he and his wife’s own struggle with infertility. “For more than ten years, we had the unique perspective of being a fertility patient while I practiced as a fertility specialist,” says Dr. Trolice who ultimately chose to build his family through adoption, resulting in a family with five children.

Dr. Trolice’s recent publication, The Fertility Doctors Guide to Overcoming Infertility Discovering Your Reproductive Potential and Maximizing Your Odds of Having a Baby, aims to educate all women, men, and couples about the options and statistics behind fertility concerns. Dr. Trolice, a fertility specialist for over 25 years, also has an established practice, Fertility CARE: The IVF Center, which he began in 2003. He prioritizes educating his patients for realistic expectations. For example, if gender selection is chosen as a treatment, Dr. Trolice assures there is no certainty the IVF cycle will result in a normal embryo of the desired gender, or even that it will result in a live birth. Further, there is a very small but possible chance the technology will result in a gender/chromosomal error so testing during pregnancy can be confirmatory. He also speaks on the topics of egg and sperm donation and freezing, surrogacy, and adoption.

Beginning with the first IVF birth over 40 years ago, ART has always faced scrutiny—including the practice of gender selection. In an article published in Facts, Views & Visions in ObGyn, it was noted that sex selection treatment for non-medical reasons was increasing worldwide. (8) In 2015, the American Society for Reproductive Medicine released their Ethics Committee opinion that fertility specialists are under no ethical obligation to provide or refuse to provide non-medically indicated methods of sex selection. (11)

Dr. Trolice stresses that assisted reproductive treatments are in an amazing era of technological advancement. However, ethics and integrity dictate that intense oversight is always the gold standard to ensure safety and proven outcomes. Dr. Trolice is annually bestowed the American Medical Association’s Physician’s Recognition Award and is a recipient of the Social Responsibility and Advocacy Leadership Awards from the National Polycystic Ovary Syndrome (PCOS) Association. He has also consistently been recognized as one of America’s Top Doctors® since 2007.

“The Fertility Doctors Guide to Overcoming Infertility: Discovering Your Reproductive Potential and Maximizing Your Odds of Having a Baby” is an authoritative infertility book written by Mark P. Trolice, MD, FACOG, FACS, FACE; Director, Fertility CARE: The IVF Center and Professor of the University of Central Florida College of Medicine. This book is meant to be a companion guide through every step of an individual’s infertility journey—including explanations on the most optimal time to conceive, advice regarding the right time for an evaluation by a fertility specialist, recommendations for evidence-based diagnostic testing and treatment including IVF, avoiding exploitation and discussions on alternative family building, such as egg/sperm donation, surrogacy, and adoption. Buy his book on Amazon.

Mark P. Trolice, M.D. is double Board-certified in Reproductive Endocrinology & Infertility and Obstetrics & Gynecology. He has the unique distinction of being a Fellow of the American Colleges of Obstetrics and Gynecology (FACOG), Surgeons (FACS), and Endocrinology (FACE). Dr. Trolice is a member of The Physicians Council of RESOLVE and is a recipient of the Social Responsibility and Advocacy Leadership Awards by The National PCOS Association. In addition to authoring numerous articles in medical journals and textbooks, Dr. Trolice published “The Fertility Doctor's Guide to Overcoming Infertility: Discovering Your Reproductive Potential and Maximizing Your Odds of Having a Baby” in January 2020 as a resource for all those building a family. For more information, visit http://www.marktrolicemd.com.