Greta Garbo lived quietly in her New York City apartment for 40 years, and it still retains many of Garbo’s furnishings and personal touches. Garbo’s place is now for sale and featured this week at TopTenRealEstateDeals.com. 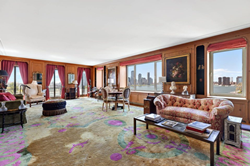 Greta Garbo’s apartment still has some of her furnishings and personal touches.

Regarded as one of the great actresses of all time, Swedish-born Greta Garbo got her start in silent films and went on to become one of MGM’s highest-grossing box office stars. She was known for her melancholic, somber persona and famous for tragic characters and understated performances, such as her portrayal of a consumptive courtesan in 1936’s “Camille,” often regarded as her best work. She was nominated for three Academy Awards and received an honorary Academy Award in 1954.

Never a fan of the Hollywood lifestyle, Garbo retired at the age of 35, refusing all opportunities to return to the screen. She led a private life, shunned publicity, and amassed an art collection auctioned for millions when she died. Known for walking the streets of New York in a trench coat and sunglasses, she inspired the sport of “Garbo Watching” for celebrity photographers and curious admirers.

Greta Garbo’s Manhattan apartment, where the enigmatic actress spent her long retirement, is now back on the market for $7.25 million. Last sold for $8.5 million in 2017 after a fierce bidding war, the home retains many of Garbo’s furnishings and personal touches but includes a newly renovated kitchen, dining room, bathrooms, and HVAC system. The three-bedroom, three-bath apartment boasts large picture windows with spectacular views of the East River, which reminded Garbo of her native Stockholm.

The massive kitchen is connected to a formal dining room and includes a Miele side-by-side refrigerator/freezer, a Thermador five-burner stove with griddle and oven, and a custom maple-top center island. Wood-paneled walls adorn the living room, Garbo’s favorite space, which includes a gas fireplace and an attached den. French doors at the far end open to a lovely balcony cooled by river breezes. The primary bedroom suite features Garbo’s beloved rose-hued Fortuny silk walls and headboard, while a second bedroom includes a pink-and-green-accented V’Soske rug designed by the movie star. A third bedroom is currently set up as a study, with its own en-suite. The home offers generous storage spaces, plus separate laundry and utility rooms.

The unit is located in the legendary Campanile building, famous for the superior, white-glove level of service and discretion it offers to its VIP residents. Other celebrities who have called the exclusive building home include Ethel Barrymore, Rex Harrison and members of the billionaire Rothschild and Heinz families. Directly beside the East River, the building is walking distance from the River Club of New York and the Sutton East Tennis Club as well as the ferry to Roosevelt Island. With a skyline dominated by iconic skyscrapers, including the Empire State Building and the art deco Chrysler Building, Mid-Town East is home to Madison Avenue’s advertising giants, the architectural destination of Grand Central Terminal, the luxury shops on 5th Avenue, and the United Nations Headquarters. Centrally located, it is easily accessible to everything Manhattan has to offer. The listing is held by Brian K. Lewis of Compass, New York, NY.