One of California’s most interesting homes, Kim Novak's former Carmel cliff home, is for sale at $12.5 million. And Pascal Mouawad, jeweler to the stars, has listed his Bel Air mansion at $15.75 million. Both homes are featured this week at TopTenRealEstateDeals.com. 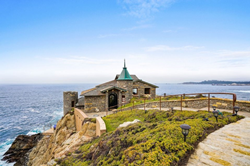 Kim Novak's former home in Carmel, California is for sale.

Well known for her starring roles in the award-winning films "Picnic," "Strangers When We Meet," "Pal Joey," and her twin roles in "Vertigo," Kim Novak chose a shorter film career, but the movies she made have become classics enjoyed as much today by movie buffs as when they were released in the 1950s and ‘60s. Preferring a quiet lifestyle, in 1961 Kim chose a home far from Hollywood on an outcropping of rock in Carmel, California where she lived until 1973. The home is now for sale, priced at $12.5 million.

One of California’s most interesting homes, the main and guest homes, with two bedrooms and 2,070 square feet, are set on two acres of rocky coastline dramatically perched over the ocean waves with unobstructed views to the horizon. The home has several roof levels, designed as a cozy escape with wood-beamed ceilings, slate floor, wood-burning fireplace, and ceiling-to-floor walls of glass to capture the rock-and-water views. There is an abundance of nature to enjoy watching from migrating whales and playful otters to pelicans soaring close to the water searching for their next fish dinner.

Born in Chicago, Kim, who is now 88, spent most of her adult life in California after a college gig touring the country as a trade show model, “Miss Deepfreeze,” for an L.A. refrigerator manufacturer, which led to the start of her film career. In addition to Carmel, Kim also lived in another of California’s prettiest areas, Big Sur, where she raised horses. In the late 1990s, Novak bought a ranch on the Rogue River in Oregon with her veterinarian husband. Though he died several years ago, she still lives there and still rides her horse and enjoys her art.

Carmel has been a celebrity hotspot since the early years of Hollywood, well known for its charming village and picturesque houses. Longtime-resident Doris Day made sure the town was pet friendly, and dogs are welcomed almost everywhere their masters are. Carmel has been either the home or preferred getaway for Clint Eastwood, who was Carmel mayor twice, John Steinbeck, Salvadore Dali, Jimi Hendrix, Steve Jobs, Joan Baez and Jack London.

Pascal Mouawad, an international jeweler to the stars, has listed his Bel Air mansion for $15.75 million. Mouawad’s fine jewelry designs have graced runways and red carpets from the Oscars to Paris Fashion Week and worn by celebrities from Elizabeth Taylor to Britney Spears. He has produced eight gemstone-encrusted Fantasy Bras for the Victoria’s Secret Runway Show, landing him in the Guinness Book of World Records for the world’s most valuable bra for his “Very Sexy Fantasy Bra” worn by Heidi Klum in 2011. He joined forces with Kim Kardashian to produce the reality star’s jewelry line, Belle Noel, and teamed up with her sisters Kendall and Kylie Jenner for their first business venture, Metal Haven, a line of teen and tween accessories.

Mouawad’s six-bedroom, 10-bath estate is every bit as glamorous as his jewelry designs. Completely remodeled in 2014, the mansion features the latest in technology and building materials. Clean lines, white walls, and lots of glass give the home an aesthetic look of timeless luxury. The 9,300-square-foot home is an entertainer’s dream with a date palm-lined exterior and a back courtyard with a gas fire pit and 70' quartz infinity pool looking out over breathtaking canyon views. Multi-colored lights illuminate the pool and the house at night, perfect for swanky parties. An oversize three-car garage and 10-car gated motor court provide ample parking for residents and guests.