Two of America's unique homes, Mrs Fields Cookies and Pilgrim's Pride Chicken Mansions, are for sale and featured this week at TopTenRealEstateDeals.com. 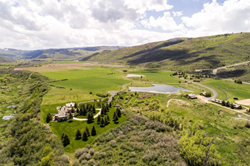 It’s the ranch that attracts foodies. Most specifically cookies and chocolate candy at the humongous home built by Debbi Fields of Mrs. Fields Cookies and now owned by chocolatier Jeanette Brooks. Sited on a 200,683-acre ranch, Brooks is ready to turn over the keys to the next rancher with furnishings, cattle and equipment included for the price of $45 million.

Debbie Fields opened her first Mrs. Fields Cookies store in 1977 in Palo Alto, California with their homemade-style cookies. Quickly becoming very popular with their customers, they opened a series of kiosks in airports and shopping centers, currently expanded to over 650 bakeries in the U.S. and over 80 in eleven countries. By 1982, they had moved their headquarters to Park City, Utah and built their European chateau-style mansion on the ranch. In the early 1990s, the Fields sold the company to an investment firm and it is currently owned by Famous Brands International with Debbie as the spokesperson. In 2011, the ranch was sold to Jeanette Brooks, founder of Xocal Healthy Chocolate.

The fabulous “Cookie Mansion” is sited on 271 acres with a mile of Provo River frontage with additional leased grazing acreage and water sources to sustain a thousand-head herd that spreads into four counties. The main house of 17,000 square feet has ten ensuite bedrooms, lots of formal and casual spaces and $1.5 million in decorator furnishings which will convey with the home. The overall design includes 11 fireplaces, copper-and-wood-coffered ceilings, stained-glass and black-walnut paneling and ceilings in the great room. Fields made purchases in Europe for the house such as a bar from Ireland, a stained-glass window of Mary Magdalene in the entry above the stairs imported from Scotland and wood from a royal residence in England.

Bo Pilgrim and his wife called it Chateau de Pilgrim, but it is affectionately known as “Cluckingham Palace” in the town of Pittsburg in East Texas lake country. The 43-acre French Renaissance estate was built by the late founder of Pilgrim’s Pride poultry products, Lonnie “Bo” Pilgrim, in 1992 as the family’s dream home. Having passed away in 2017, the family has decided that instead of listing it with a brokerage, it will go to auction on October 15th with no reserve.

Spanning 18,000 square feet of living space, the palatial-and-ornate, chateau-style home was custom-built with the requirement that all rooms would overlook the grounds. Everything about the house speaks of the Pilgrim’s love of formal entertaining, from the drive and the clipped boxwood mazes and understated rows of pink flowers at the entry to the grand-marble, wrought-iron and gold-leaf foyer. The home has six bedrooms, eleven baths, a glass elevator that overlooks the grounds, European gas fireplaces and red oak wood floors. Gold-leaf accents are carried throughout the formal rooms. For more casual entertaining there is an indoor swimming pool and spa, a bar at one end with lots of perimeter seating and multiple French doors opening to terraces and lawn. The chef’s island kitchen is connected to a butler’s pantry and the master suite that opens to a patio has a sitting room with fireplace, built-in storage and closets and natural rose-quartz accents in the master bath. Other features include caretaker’s quarters, two offices, full bar, gym, media room and three-car carport. Other structures on the property include three large equipment shops with water and electric and a greenhouse.

Bo and his brother Aubry founded Pilgrim’s Pride Corporation in 1946 with a small feed store in Pittsburg. The business continued to grow until it was one of the largest suppliers of poultry products in the country. When Aubry died in 1966, Bo took over as CEO and continued the expansion while becoming the face and voice of the company both on the company logo with his pilgrim hat with the big buckle and as spokesman in the chicken commercials. He sold the company in 2009 to the Brazilian beef company, JBS, and its headquarters was moved to Greeley, Colorado. Having acquired a net worth of approximately $1 billion, Bo was a philanthropist and an active part of the community in Pittsburg.

The mansion that chicken built in East Texas lake country will be sent to auction with Concierge Auctions at no reserve on October 15th.