Her heart might be in Havana, but Camila Cabello lives in Los Angeles where she recently put her beautiful home on the market for $3.95 million. Camila Cabello's home is featured this week at TopTenRealEstateDeals.com. 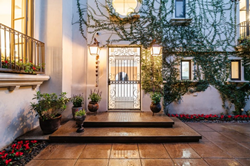 Camila Cabello recently listed her home in the Hollywood Hills for $3.95 million.

Her heart might be in Havana, but the exotic pop singer Camila Cabello has been living a big, bold, beautiful life with her best friend and now ex-partner, Canadian singer Shawn Mendes, in LA's Hollywood Hills neighborhood in a home that has everything, including a recording studio. Camila Cabello's home is now on the market priced at $3.95 million.

Though together for two years, the couple has separated but are still each other’s best friends, according to USA Today. Was the split the decision-maker to put her house up for sale? In anticipation of all the new changes in her personal life, selling her charming Hollywood Hills home is a major next step.

Perched above Sunset Strip, the 3,579-square-foot home brings a taste of the Mediterranean with its walled garden and wrought-iron gate, arches and brightly tiled fireplace surrounds. The four-bedroom, four-bath home was built in 1977 with all 21st-century updates while still retaining its original charm. With complete privacy in mind, the wall that encloses the rear yard and saltwater pool welcomes indoor/outdoor living. Kitchen and baths are sleekly modern with loads of character in the public rooms. Glass doors stack out of the way to create a vanishing threshold between the family room and outdoor terrace and greenery. Ideal for performers or wannabes, the house has a complete recording studio with professional equipment and a vocal booth. The split-level house has distressed wood floors and tile throughout. The master suite has its own dreamy fireplace. In addition to the pool there is an outdoor fireplace, grilling and dining area.

Born in Cuba but raised in Miami, Cabello’s career was kick-started when she appeared on “The X Factor” in 2016 and became part of the group Fifth Harmony, created by Simon Cowell, where she stood out from the group. From there she branched out on her own with her mega-hits “Havana” and “Senorita,” winning almost 100 industry awards, including two Latin Grammy and four American Music Awards. At only 24, Cabello is likely just warming up for a wildly, successful future.

Hollywood Hills is the ideal location for easy access to the studios, a magnet for star-seeking tour buses and as the backdrop location for many films. Celebrities who have lived and do live there include Katy Perry, Ben Affleck, Kevin Costner, Britney Spears, Bryan Austin Green and Justin Timberlake.