Judy Garland's Malibu beach house and the Bee Gees' Robin Gibb mansion are for sale and featured this month at TopTenRealEstateDeals.com. 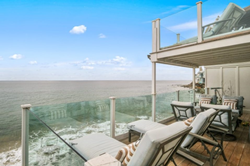 The Malibu beach house where Judy Garland lived with her young daughter, Liza, is for sale.

The Malibu beach house where Judy Garland lived with her second husband, Vincente Minnelli, and their daughter, Liza, shortly from when it was built in 1947 into the 1950s is for sale. Completely rebuilt in 2013, it is priced at $3.895 million.

What’s better than to cozy up on a rainy Sunday afternoon and sink into old movies, some of the best of which starred Judy Garland. With her exceptional singing voice, the studios cast her in the best musicals of the time such as "Wizard of Oz," "Meet Me in St Louis," "The Harvey Girls," and "Easter Parade" - still big favorites on cable television. Moviegoers were stunned by her voice and her youth, making her early films huge box office hits. It was only later when she starred in films without singing and portrayed as an adult that her popularity failed and her movies lost money for the studios.

Measuring 1,311 square feet, the former Garland-Minnelli beach house is on Malibu’s Las Tunas Beach within a stretch of beach homes that have been the backdrop for a number of films. Enjoying uninterrupted ocean-and-beach views, the house has three bedrooms and three baths with a double-view fireplace for both the vaulted-ceiling living room and dining room. Designed in Cape Cod style, entry is through a private courtyard. The first floor has views straight out to sea through ten-foot accordion doors opening onto the expansive deck where one can sunbathe or entertain guests. The kitchen has been completely updated with marble countertops and Viking appliances. Upstairs, the master bedroom opens onto its own private oceanfront deck.

In the 1960s and ‘70, the Bee Gees were rock ‘n’ roll royalty. Three brothers: Barry, Maurice and Robin Gibb even rivaled the Beatles for a few years for record sales and popularity. The Long Island waterfront home where Robin lived in the 1970s and ‘80s is for sale. On almost seven acres, it was built in 1926 and named “Kenjockety,” which is Native American for “Far from Noise.” Robin’s former home is priced at $12.9 million.

Originally built as a wedding gift from lumber-magnate Arthur H. Fleming to his daughter, Marjorie, the home was designed by Bertrum Grosvenor Goodhue, who designed over 30 prominent Gothic and Spanish Colonial-style buildings in the early 1900s, including St. Bartholomew’s Church in New York City, the Chapel at West Point, the Nebraska State Capitol and the Rockefeller Library at the University of Chicago. Fleming spared no expense when it came to his daughter. From location to landscaping, not a detail was overlooked. Sited on a bluff on almost seven acres, Kenjockety has views of Oyster Bay and Cold Spring Harbor across Long Island Sound. Grounds contain a greenhouse, swimming pool, a one-bedroom cottage with a wood-burning fireplace, a large deepwater dock designed for large yachts, and over 500-feet of beachfront.

Kenjockety has undergone nine years of refurbishment at a cost of over $7 million. The interior has ten fireplaces, seven bedrooms, seven full baths and three half baths. As expected of grand houses of the era, rooms are large but still warm and inviting. The impressive foyer has a solid mahogany-coffered ceiling, marble-tiled floor and large fireplace. Both the formal living and dining rooms have wood-burning fireplaces and there is a winter garden room that opens from the living room. Loaded with character, two surprises are a hidden powder room in the bookcase of the library and a hidden built-in bar on the other side of the library with a sink and wine refrigerator. Walls throughout the structure have Venetian plaster, and wood used in all the rooms is mahogany, including the custom-closet systems. In addition to the public rooms, there is a third-floor home office, a game room, and a totally refurbished kitchen with a breakfast room. Like almost every room in the house, the kitchen breakfast room overlooks the gardens and water.