Fabulous homes from Sandra Bullock, Kelly Clarkson and Joan Collins, and a historic mansion that Cher once owned are featured this month at TopTenRealEstateDeals.com. 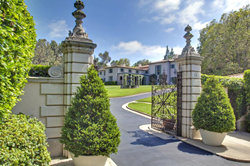 Owlwood Mansion has been home to both Cher and Marilyn Monroe.

She isn’t just America’s sweetheart, an Oscar-winning actress and great mom, she’s also a real estate mogul with properties from coast to coast, who has invested her money and time wisely. Sandra Bullock's Tybee Island home on the Georgia Coast of the Atlantic Ocean, which went up for sale in the spring of 2019, has just sold.

Bullock purchased the beachy 3,360-square-foot cottage and 2,848-square-foot guest house in 2001 for $1.5 million. An architecturally stunning main house and guest house on almost three acres made up of nine parcels, the home has private access to one of the prettiest white-sand beaches in the country. The seven-bedroom estate has the capacity to sleep 12 family and friends with a large pool, game room, gym and basketball court. The home is decorated with emphasis on white linen and wicker with a contemporary airy, coastal vibe, and all furnishings were included in the sale. Rachel Umbreit and Ruthie Lynah-Whitlow of Celia Dunn Sotheby's International Realty handled the sale.

On the market since 2017, the historic celebrity-magnet Owlwood mansion, the crown jewel of L.A.’s Holmby Hills, has sold for $88 million. Completed in 1936, few Los Angeles mansions have its stature, rolling grounds or have been the center of so much gossip. The classic Tuscan-styled mansion was built in 1935 by Robert D. Farquhar for Florence and Charles Quinn. Florence was divorced from Arthur Letts who, in 1925, was the original owner and developer of the 3,296 acres of land on which Holmby Hills is located. The home on four acres was the largest and most luxurious house at the time measuring in at 12,000 square feet and a cost of $150,000. Previous owners or residents include Marilyn Monroe, Tony Curtis and Sonny & Cher. The listing agents were Sally Forester Jones, Tyrone McKillen and Tomer Fridman of Compass, Beverly Hills and Drew Fenton of Hilton & Hyland, Beverly Hills.

Joan Collins - the legendary British actress, star of the long-running ABC-hit Dynasty, and still shockingly glamorous at age 87 - has her Manhattan pied-a-terre up for sale. As with many stars who crisscross the globe filming, it was convenient to have glamorous homes in locations where they spent the most time. Not to do things in a small way, Joan Collins' home in the Dorchester in Midtown Manhattan is a combination of three units in a white glove co-op only a few blocks to Central Park, fine dining and shops. Open, airy and sunny with its many windows, one of Joan’s favorite things about the condo is its 16 closets. Built in 1957, there are two master suites in separate wings and a third guest bedroom. Priced at $2.095 million, the residence is listed by Carolyn Weiner-Trapness, Brown Harris Stevens’ Broadway office, New York City.

With her professional life now centered in Los Angeles, singer-talk-show-host Kelly Clarkson's Tennessee lake home has had a price reduction - originally $8.75 million is now at $6.95 million.

Kelly has owned her Nashville-area home for almost ten years, perfectly positioned for a full view of Old Hickory Lake with a grassy lawn going to the wide-water’s edge, encompassing four acres.
Decorated by Kelly in her unique style including an especially fun cowboy bar with saddle-bar stools, it is not surprising that Wayfair chose Clarkson as a brand ambassador in an exclusive furniture and decor collection.

A fun place to live for the whole family with 20,121 square feet of living space, the home has seven bedrooms and eleven baths, theater, game room, gym and a two-story office. The exterior has a covered two-boat boathouse with lift, a volleyball-sand court, an outdoor children’s play area and a pool-spa terrace with a covered pavilion for outdoor dining by a fireplace. All accessed via a double-sided-curved staircase descending from the upper terrace. Gardens are laid out in the English style and for the green-thumbed, there is a greenhouse. Jack Miller of Bob Parks Realty in Brentwood, Tennessee holds the listing.