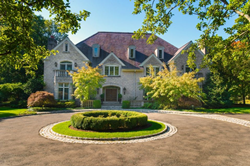 Regis Philbin and wife, Joy, lived in this Connecticut home from 2008 until his death in 2020.

America mourns the loss of entertainer-and-television-host Regis Philbin with his smiling face and infectious charm that brought a smile to millions of Americans who tuned into his cheerful-morning TV show, "Live!," for more than 23 years. The everyday guy next door to his fans, Regis was at his best bantering with his audience about the events in his life, which sometimes included the Greenwich, Connecticut home that he and wife, Joy, purchased in 2008 and lived until near his death. A home that Regis often joked about his lack of home repair skills leaving them up to Joy to get done. When they put the home up for sale in 2019, Joy, who was once an interior designer and hosted several home-design TV shows, told the Wall Street Journal, "We've moved around a lot and lived in many houses together but this house will always be our favorite. We celebrated many birthdays and holidays and never had to worry about inviting too many of our family and friends. There was always room for everyone."

The Philbins listed the home in late 2019 with plans to move full time to California to be closer to their children. According to GreenwichTime.com, the home recently sold for $4.015 million, just a few weeks before Regis died from a heart attack. An alumnus of the University of Notre Dame and super enthusiastic fan of the Fighting Irish, Philbin was buried at Cedar Grove Cemetery on the school’s campus.

The Philbins’ English-Manor gated mansion with 13,661 square feet, six bedrooms and nine baths is sited on 2.59 acres of expansive manicured lawns dotted with mature trees and flower gardens in a neighborhood of similar multi-million-dollar homes. While the home is an impressive venue to entertain, it also has the warmth and livability that encourages family togetherness with formal living and dining rooms, a large eat-in kitchen, mahogany-paneled library, home theater, family room, sunroom, billiards room, large gym, sauna, wine cellar and a tasting room with a full bar. The lush grounds include a swimming pool, spa and tennis courts with terraces for entertaining and dining. With enough activities to satisfy all ages of family and guests, it has seven fireplaces to warm cold toes on chilly New England winter nights.

Regis set a Guinness World Record in 2004 for having the most on-camera hours of any TV personality in history with over 15,000 and went on to add to the record for many years. He often made a joking reference to the growing on-camera total telling his viewers “One more hour!” during his shows. In addition to Live!, Regis was also a host of the wildly popular "Who Wants to be a Millionaire," "Million Dollar Password" and as a judge on the first season of "America’s Got Talent." But he will mostly be remembered for the cheerfulness he brought into America’s homes on "Live! With Regis and Kathie Lee" and later with Kelly Ripa.

The listing agent for the Philbin home was Joseph Barbieri of Sotheby’s International Realty, Greenwich Brokerage.