The Weeknd doesn’t have to wait until the weekend to kick back in his L.A. home with almost every imaginable amenity in today’s best mansions. And Rob Lowe proved that patience is more than a virtue in today’s high-end real estate market. After listing their Montecito home in 2018 at $47 million and with only one price cut in 2019 to $43 million, it just sold over the asking price at $45.5 million. Both homes are featured this week at TopTenRealEstateDeals.com. 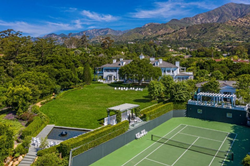 The Weeknd doesn’t have to wait until the weekend to kick back in his L.A. home with almost every imaginable amenity that can be found in today’s best mansions. Built in 2016 at almost 14,000 square feet spread across three acres, Canadian-singer-songwriter Abel Makkonen Tesfaye’s (better known as The Weeknd) home was designed on a grand scale for entertainment. The seven-bedroom, 11-bath property includes a two-bedroom guest house, a large barn and a five-car auto gallery. Amenities include a basketball court, gym, pool, spa, a cabana with its own living room, home theater, a bar for entertaining and a dramatically lit wine room. There are fireplaces in the formal living and dining rooms, a family room and office. The large chef’s kitchen has two islands and opens to the family room and terraces. There are two master suites and the entire home is crisp white with California sunlight spilling into the rooms. The Weeknd recently listed the home for $24.995 million, soon after he spent $21 million for a new penthouse in L.A.’s Beverly West condo building.

Currently busy promoting his new album "After Hours" and raising funds for several charities including the Equal Justice Initiative, The Weeknd has won three Grammys, eight Billboard Music Awards and two American Music Awards. His home is listed by Angel Salvador with The Agency in Beverly Hills.

Rob and Sheryl Lowe have shown that patience is not only a virtue, but often a necessity in today’s high-end real estate market. Having listed their home in 2018 at $47 million and with only one price cut in 2019 to $43 million, it just sold over the asking price at $45.5 million to the co-founder of RoundTable Health Care Partners.

A classic East Coast style and a stand out from the general Mediterranean architecture in the area, the Lowe estate is sited on just over three acres. The main house was designed by architect Don Nulty, built in 2009 and encompasses 10,000 square feet. With a total of 20 rooms, there are large open formal rooms, a huge white and cheerful family kitchen, separate catering kitchen, eight bedrooms, eleven baths, office, library-music room with bar, family room, various conversation rooms and nooks, movie theater, well equipped gym and expansive wine cellar. There are nine indoor fireplaces throughout the house with one in the master suite.

In addition to the main house, the grounds contain a two-bedroom guest house, one-bedroom pool house with staff quarters and an outdoor kitchen. Also a pool and spa, tennis court with observation areas and lushly landscaped lawns large enough for team sports with mature trees and a vegetable garden. There are two outside fireplaces, terraces and loggias for relaxing or entertaining, a water serenade from fountains and a koi pond. Formal rose gardens overlook the lawn and from most any location one can enjoy sunsets over the Pacific.

Located in celebrity-studded Montecito, the new owners will be rubbing elbows with some of the world’s biggest stars including Oprah Winfrey, Ellen DeGeneres and Gwyneth Paltrow. Montecito is a much favored retreat away from the work-a-day world of filmdom, located 80 miles northwest of Los Angeles between the Pacific Ocean and the Santa Ynez Mountains in Santa Barbara County with spectacular hillside views, nearby whale watching and beautiful weather.

Lowe became one of Hollywood’s youngest hot shots in the 1980s in hit movies "The Outsiders," "St, Elmo’s Fire" and "Oxford Blues" and later in his role in the popular TV drama "The West Wing." More recently he has appeared in the comedy "Parks and Recreation" and reality-show adventures with his two sons in "The Lowe Files." The agents for the Lowe home are Eric Haskell of The Agency and Luke Ebbin of Compass.