Selena Gomez's and John Barrymore's former mansions (Barrymore's home comes with a 1920's opium den) are for sale and featured this week at TopTenRealEstateDeals.com. 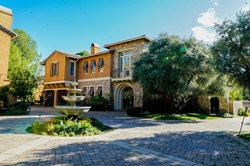 A Calabasas, California home that was purchased by Selena Gomez about the same time she was ending her starring role in the Disney Channel’s Wizards of Waverly Place is for sale at $6.6 million. Gomez sold the house in 2016 to Moraccan-American rapper Karim Kharbouch, better known by his stage name, French Montana. A year after moving in, Karim released his second studio album, "Jungle Rules," which landed at number three on the Billboard 200. Its single, "Unforgettable," was his first song as lead artist to reach the top 10 on the U.S. Billboard Hot 100.

The 7,786-square-foot mansion with five bedrooms and six baths on 3.10 acres of land is located in the gated Mureau Estates community of Calabasas. Palatial with its five fireplaces, large rooms, tile floors and chef’s kitchen outfitted to handle large parties and with a large pantry, it caters to those who crave creature comforts and entertain routinely. Included are a formal living room, dining room with floor-to-ceiling windows, private family rooms, full bar, gym and movie theater. Glass doors open to a stunning backyard with a courtyard, pool, spa, cabana, Viking outdoor kitchen and a brick pizza oven. Montana turned the former guest house into a $400,000 eclectic recording studio that is guarded by a large elephant topiary. The listing agent is Gabriel Palmrot of Douglas Elliman, Beverly Hills.

Historically connected to America’s first dalliance with opium and and also the home of one of America’s most controversial great actors, Bella Vista Mansion is for sale with its perfectly maintained opium den still in place, reached by a hand-carved ladder above the master suite. John Barrymore, who had been expelled from more schools than he later had marriages, seemed to play with life and surrounded himself with whatever exotica delighted him through his alcohol and opium-induced imagination. The mansion was built in 1926 and had everything to feed his creativity from its stunning Pacific Ocean views to the large aviary, now a guest room, and plenty of space for his bizarre collection of shrunken heads. Originally put on the market at $42.5 million, it is now listed at $16.995 million.

Barrymore's Spanish-style home with its many red-tiled roofs and gardens with winding paths through cultivated jungle is still dreamy. Water trickles and splashes over the home’s waterfall spilling into the pool from where the Los Angeles skyline view is magical. When first offered for sale, the price included the entire seven acres and a number of extra buildings. Today it encompasses one acre and almost 7,000 square feet of living area with a total of seven bedrooms and eleven baths distributed between the main house, two guest houses and two apartments. Though updated to the 21st century in all the crucial places, the charm and allure are still quite evident in the dramatic fireplaces, redwood log floor in the cigar lounge and bar and one is never far away from the music of falling water from fountains or the pool waterfall. The listing agents are Josh and Matt Altman and Tracy Tutor of Douglas Elliman, Beverly Hills.