Shaquille O’Neal and Joe Pesci just sold their large-and-upscale homes on the water. Their homes are featured this week at TopTenRealEstateDeals.com. 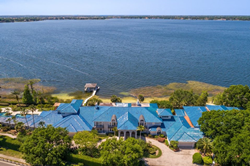 Shaquille O’Neal could easily afford to wait out the sale of his Isleworth, Lake Butler estate near Orlando, Florida, which he purchased in 1993 for $3.95 million. No, it didn’t sell for its original asking price of $28 million, nor did it sell for its later price reduction to $16.5 million. It sold for $11 million, and the retired NBA star and astute businessman went to the bank clutching his $7 million profit.

Highly customized, Shaq’s mansion, located in a gated golf community near Disney World and ESPN, measures in at 31,000 square feet and spreads across its entire three acres. It includes 12 bedrooms, 15 baths, chef’s kitchen with Viking, Wolf and Sub-Zero appliances, a massive living room, formal dining, media room with bar and a "gentleman’s room" with game tables, and wet bar. The master wing has a four-room closet, his-and-her baths and, in the bedroom, a custom 15-foot round bed. The guest wing has its own great room with bar and five ensuite bedrooms. Some unusual rooms include a temperature-controlled, cedar-planked humidor and wine storage, and an aquarium-style room with a saltwater triangular fish tank. Most impressive is the wall mural of a true-to-size, red tractor-trailer barreling toward the interior of the room on an expressway. With the front cab bumped out of the wall and his nickname Superman logo on the grill, the realism is electrifying.

“Joe Pesci Got Exactly What He Wanted: $6.5 Million”

Joe Pesci was a clear winner during the Jersey Shore real estate boom. Now that New Yorkers are flooding the New Jersey real estate market and snapping up everything in sight, Pesci’s waterfront home sold for his original 2019 asking price of $6.5 million, making it the highest-priced sale in the area. A native of Newark, Pesci purchased the home in 1994 for $850,000.

Located on the seven-mile-long barrier island in the Lavallette section of the Jersey Shore, the 7,200-square-foot home has a waterfront pool and spa on the expansive deck overlooking the water and its private pier. Designed in Art Deco style, rooms are unusually spacious, light and airy. The eight-bedroom, eight-bath home has an open floor plan, large eat-in kitchen, and a dining room that opens to the pool terrace and bay. The comfortable media room’s walls are decorated with posters from Pesci’s films and, because his first job was as a barber, a barber’s chair occupies one corner of the room as a poignant reminder. The upper level, which can also be reached by elevator, contains bedrooms and an office, all with upper terraces and spectacular views. A downstairs party room next to the pool and spa has its own kitchen for casual entertaining.

One of America's most versatile actors, Pesci has the ability to horrify movie goers such as the role as mobster Nicky Santoro in “Casino” and his Academy Award-winning performance as the deranged gangster Tommy DeVito in “Goodfellas,” to the gut-busting hilarity of Vinny in the film “My Cousin Vinny” and an inept burglar in “Home Alone.”