A Miami Beach mansion owned and decorated by Cher in the 1990s and Matthew Perry's Los Angeles penthouse are for sale and featured this week at TopTenRealEstateDeals.com. Photos and celebrity home video available for media use at: http://bit.ly/toptenmedia. 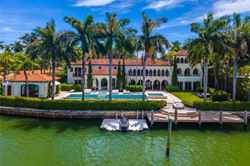 Cher owned and decorated this Miami Beach mansion in the 1990s, now on the market at $22 million.

One of the celebrity world’s most dynamic home decorators and flippers, Cher has bought, designed, improved and sold magnificent luxury condos and homes from Hawaii to California, New York and Florida. Over the years her tasteful decor, with a touch of the exotic, has made decorating magazine covers in the finest architectural publications worldwide. One of her best homes was on exclusive La Gorce Island in Miami Beach, a home with the Cher signature still very much intact. A classic example of Cher’s fondness for Moorish architectural additions, the Biscayne Bay estate has recently come on the market at $22 million.

In 1993, Cher bought and then, according to "Architectural Digest," turned the home into a grand villa that reflected her evolving taste. It was the beginning of her penchant for Venetian and Moorish design, unlike the minimalist clean lines and white furniture of her previous homes. This home she filled with religious art, rich-deep-hued fabrics, carved wood, and decorative “clutter,” as she called it. When she sold the house in 1996, she took the furnishings from this and some of her other homes and started a mail order catalog named Sanctuary. Though now clean-lined, bright, white and clutter free, the Moorish arches and a fireplace with Moorish accents are shown off perfectly, adding a welcome uniqueness to the tropical environment. The listing agent is Lourdes Alatriste of Engel & Volkers, Miami, Coconut Grove.

Like many celebrities, Friends actor Matthew Perry has been in lockdown in his Malibu home. While downsizing his real estate holdings on the West Coast. Matthew recently put his Malibu home on the market after purchasing a $6 million home in Pacific Palisades, but his most opulent holding is his glamorous penthouse in LA's Century Tower which has recently had an impressive price drop. Purchased by Perry in 2017, it was originally listed last year at $35 million. It has now been relisted at $27 million.

Perry’s entire 40th floor at the Century measures in at 9,318 square feet with ceiling-to-floor views over Los Angeles - visually stunning in daylight and sparkling with lights at night. It includes enormous rooms - a living room with two fireplaces and a huge master suite with multiple living areas. Overall, there are four bedrooms and eight baths, game room and home theater. The chef’s kitchen has island seating as well as a table for casual dining and a separate dining room with glass walls highlighting the views. Four terraces are perfect for entertaining and dining.

Designed by Robert A. M. Stern Architects in 2009, Century attracted Paula Abdul, Elizabeth Berkley, Rihanna and Candy Spelling, widow of filmmaker Aaron Spelling, who bought the top two floors. The building rises above four acres of lush private gardens with a long list of amenities including a 75-foot-long swimming pool, screening room, yoga and Pilates studios and a wine-storage facility. The listing agents are Greg Holcomb and Cassandra Petersen of Compass, Los Angeles.