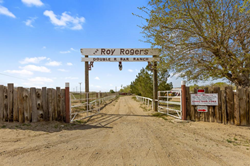 The California ranch where Roy Rogers and Dale Evans lived is for sale.

American cowboys have been popular around the world since Tom Mix starred in Wild West silent movies in the early 1900s, and cowboy films have been dubbed in languages of almost every country. Over the years, there have been many cowboy stars, but the king of all of them was, hands down, singing-and-yodeling-cowboy-actor Roy Rogers who was widely known as the “King of the Cowboys.” Roy and his co-star and wife, Dale Evans, lived on their 65-acre ranch with their clan of natural-and-adopted children; Roy’s famous horse, Trigger; Dale’s horse, Buttermilk; and their German Shepherd dog, Bullet, until Roy died in 1998. Their Double R Bar Ranch in Apple Valley, California is for sale, priced at $3.7 million.

Cincinnati-born Rogers got his start in films after moving to California to escape Depression-era poverty and playing a bit part in a Gene Autry movie. Roy quickly became a matinee idol in the 1930s; he and Dale were everywhere - on radio, film and “The Roy Rogers Show” on television, which always closed with the song, “Happy Trails” (Happy trails to you . . until we meet again) written by Dale. They appeared with Trigger, Buttermilk and Bullet along with various sidekicks Pat Brady, Andy Devine, “Gabby” Hayes and Smiley Burnette. They made over 100 films and had both radio and television programs at the top of the ratings in the 1940s and ‘50s. In Roy and Dale’s later years, the family created a museum on the ranch which housed the couple’s film memorabilia including full-sized replicas of Trigger, Buttermilk and Bullet. Instead of taxidermy, the hides of the animals had been stretched over plastic forms for realism. As told by their son, the tourist favorite was Trigger, who had died at age 33. Dale and Roy would come out and sign autographs and talk with visitors. After their deaths, the museum was moved to Branson, Missouri and the ranch was sold.

The Rogers ranch today has all of the couple’s original buildings and horse race track, but in addition the current owner has added a complete Western town, campground, saloon, a blacksmith shop and other structures. It is being used as a wedding venue and a film set, and could be utilized as an equestrian center generating multiple sources of income. Roy’s red barn contains his original workshop, a kitchen, restrooms and a bridal room. Grounds include 17 horse stalls and a vineyard planted by Rogers in the 1960s. There are three residences, including the 1,900-square-foot main house, a 1,400-square-foot guest house and a 1,300-square-foot bunkhouse. Combined, they offer six bedrooms and six baths.