The spectacular mansion from ABC-TV's hit show 'Nashville,' and one of the East Coast’s most historic properties, with ties to the founding of the Quaker religion and a young Benjamin Franklin, are for sale and featured this week at TopTenRealEstateDeals.com. 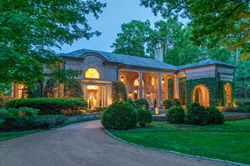 This mega-mansion seen regularly on ABC-TV's 'Nashville' is for sale at $15.999 million.

Country music fans know that many of their favorite stars live in the most spectacular homes in Nashville’s best neighborhoods. For the hit television show 'Nashville' that was all about Music City and the stars and wanna-be stars who live, work and perform there, location scouts headed straight to the town’s elite Belle Meade neighborhood. The luxurious mega-mansion on Belle Meade’s Page Road that was chosen by ABC-TV as the home of the show's main character, Rayna Jaymes, the queen of country music played by Connie Britton, is on the market for $15.999 million. Co-listing agents are Mauricio Umansky of The Agency, Beverly Hills and Dennis Johnson of Worth Properties, Nashville.

One of the East Coast’s most historic properties, with ties to the founding of the Quaker religion and a young Benjamin Franklin, the Riverstone Estate in Foxburg, Pennsylvania is for sale. The town is named after James Fox, brother of Quaker-founder George Fox who purchased 5,000 acres from William Penn in 1685. The Fox family had vast investments, business holdings and wealth and employed hundreds including Benjamin Franklin as a young accountant. In the early 1800s, the family began to build their extensive homestead legacy at the confluence of the Clarion and Allegheny Rivers in western Pennsylvania as their summer home from their native Philadelphia. The entire estate on six miles of river frontage totals 26 structures with several mansions, one-of-a-kind carriage house, greenhouse, timber-stone cottage, chicken house, sugar house for the estate’s maple syrup, equestrian center, several barns including a sheep and an alpaca barn, an aviary and the commonwealth’s first complete arboretum. The grounds are equally extensive with 23 ponds, onsite gray-stone walls, miles of trails and a cemetery where members of the Fox family are buried. The entire compound is priced at $15 million. The listing agent is Randy Jelliff of Jelliff Auction and Realty, Wellsboro, Pennsylvania.

Riverstone in Pennsylvania totals 26 structures with several mansions, for sale at $15 million.