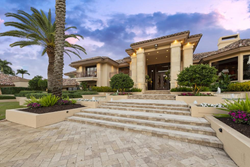 A self-made billionaire, John went from a college-dropout, farmer’s son to meteoric rise to billionaire by mathematically figuring out how commodities rose and fell by working with soybean sales on his father’s Arkansas farm. In 1981, he started his own commodities trading firm, J.W. Henry & Co., which made his fortune.

Always a sports fan, John bought the minor league baseball team Tucson Toros in 1989, partial interest in the New York Yankees in 1991 and sole owner of the Florida Marlins in 1999. He hit the big time in 2002 when he purchased the Boston Red Sox for $380 million soon helping guide them out of an 86-year drought to win the 2004, 2007, 2013 and 2018 World Series titles. With a lifetime of success on almost everything John Henry touches including a current value of about $3 billion for the Red Sox, it’s not surprising that he created one of the most stunning homes in Florida.

As a new resident of Florida with his second commodities office in Boca Raton, John purchased a 6.3 acre parcel of land in the exclusive 200-acre gated community of Le Lac - only five miles from the center of downtown. A fan of Japanese design, he incorporated it into the plans for his new home which the family named “The House of Peace.” The home was completed in 1995 with large open spaces, 40-foot ceilings, skylights and walls of glass on the main floor overlooking the calm waters of the lakefront. The house measures 41,000 square feet with 27,832 square feet of climate-controlled indoor living space containing seven bedrooms and 19 baths. Features include a cherry-paneled library, an indoor-outdoor pizza room, a theater with concession stand, a state-of-the-art recording studio, and an underground 1,000-bottle wine cellar. One of the most notable features is the memorabilia and sports-bar room built for Henry’s collection of sports trophies.

The custom-designed mansion of sports magnate John W. Henry is now for sale in Boca Raton priced at $25 million. Boca is one of the East Coast’s most upscale towns on the Atlantic Ocean with expensive shopping, restaurants, Florida luxury condominiums and homes. The listing agent is Seneda Adzem of Douglas Elliman, Boca Raton.