Celebrity Homes: The Godfather Movie House In New York Is For Sale 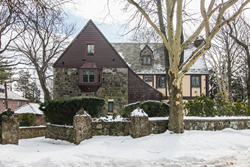 The Staten Island movie home of Vito Corleone in “The Godfather” is for sale and featured this week at TopTenRealEstateDeals.com.

Rated as one of the best movies of all time, “The Godfather,” the blockbuster crime film produced in 1972, ran away with the Oscars winning Best Picture, Best Actor and Best Adapted Screenplay. The portrayals of an extended New York crime family by its cast of Marlon Brando, then unknown Al Pacino, James Caan, Robert Duvall and Diane Keaton showed the personal lives of the Mafia during their heyday years of the 1940s and 50s. Most of the movie’s scenes were filmed in New York City locations including Bellevue Hospital, St. Patrick’s Cathedral, Calvary Cemetery and a 1930 Tudor that was the stately home of Vito Corleone.

The movie home chosen for Vito Corleone, played by Marlon Brando, was the longtime family home of Edward and Mary Norton in the Todt Hill neighborhood of Staten Island. It was recommended by Gianni Russo who grew up in the area and played the role of Vito’s traitor son-in-law, Carlos Rizzi. The Norton home was large, but unpretentious enough to blend in seamlessly with five neighboring homes to look like one big compound on movie screens during the 18 months of the film's production. “Godfather” fans will probably remember the home best for the movie’s opening garden party wedding reception for Vito’s daughter, Connie Corleone, while bobby-sox pop singer Johnny Fontane pleaded for the Godfather’s help to land a coveted Hollywood movie role. The home was also a good place for the Corleone family and associates to hunker down during the Mafia Wars.

Now for sale after a complete renovation in 2012, the 6,248-square-foot natural stone Tudor is sited on over a half acre of lawns, mature trees and landscaping that invites any size garden party and now enhanced further with an in-ground saltwater pool and infrared grill. No longer is the kitchen the small 1940’s-style where the cauldron of “Sunday gravy” simmered, but is now a modern day cook’s kitchen and breakfast room where friends and family gather in comfort. With five bedrooms and seven baths, the house is perfect for a large family and their guests with entertaining made easy in the formal rooms. There are also two offices, gym, playroom and two fireplaces. The basement features an English pub and man cave area with a game room, storage room with bath and four-car garage. Also a sound system, intercom, radiant heat, natural gas generator and, of course, a state-of-the-art security system.

The Staten Island home of the fabled Vito Corleone, seen around the world in the film “The Godfather” that grossed $245 million, is for sale after a complete renovation priced at $2.895 million. The listing agent is Connie Profaci of Profaci Realty in Staten Island, New York.