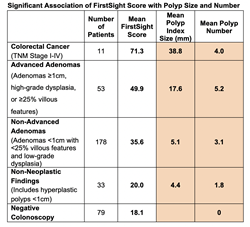 Significant Association of FirstSight Score with Polyp Size and Number

CellMax Life, a molecular diagnostics company with a proprietary technology to detect pre-cancer and cancer cells in the blood, today released further details from its U.S. study (Zenith) evaluating the efficacy of its FirstSight blood test in detecting colorectal neoplasia. The data was presented in an oral presentation at the American Society of Clinical Oncology (ASCO) Annual Meeting on May 29-31 and is now available via the 2020 ASCO Virtual Scientific Program.

The abstract titled “A sensitive and quantitative multimodal blood test for the detection of colorectal adenomas and cancer: correlation with size and number of polyps,” highlights a significant association between FirstSight scores and the number and size of polyps (precancerous adenomas) found in enrolled subjects by colonoscopy. Additionally, gastrointestinal circulating epithelial cells (CECs) were shown to be a key biomarker in providing substantive predictive information of polyp size and number above and beyond the cell-free DNA and methylation biomarkers.

These details come less than one month after Digestive Disease Week 2020, where the company revealed data showing the performance of its FirstSight blood test detecting pre-cancers (advanced adenomas) with 75.5% (95% CI: 61.7%-86.2%) sensitivity, at a 90% specificity (81.0%, 95.5%), while successfully detecting colorectal cancer with 100% (95% CI: 71.5%-100%) sensitivity. This study suggests that compared with the fecal immunochemical test (FIT) and U.S. Food and Drug Administration (FDA) approved screening tests, the FirstSight blood test has the potential to be superior for the detection of advanced adenomas with high specificity.

The U.S. Multi-Society Task Force on Colorectal Cancer Guidelines provides recommendations for when to repeat colonoscopy based on risk stratification according to the number of adenomas, maximum size of polyps and histopathologic findings of all resected lesions. Low-risk patients, those with 1-2 adenomas less than 1 centimeter, are recommended to have a repeat colonoscopy in 7-10 years. Higher risk patients with findings such as multiple adenomas, adenomas larger than 1 centimeter, or adenomas with villous features or high-grade dysplasia should have a repeat colonoscopy in 1-5 years. However, up to 50% of patients who have had a polypectomy are not compliant with the recommended timing of follow up colonoscopy. Since these patients could be at an above-average risk based on their previous findings, this lack of compliance is noteworthy. The ASCO data showing the correlation of FirstSight scores with polyp size and number brings a notable clinical opportunity to inform the subsequent surveillance colonoscopy interval after polypectomy for this population. With a blood test, FirstSight testing has the potential to identify those who may benefit from closer surveillance, reducing colorectal cancer (CRC) incidence.

The study enrolled 354 patients with no prior diagnosis of colorectal cancer or inflammatory bowel disease. Patients who consented had their blood drawn prior to colonoscopy and processed at CellMax Life. CEC counts, mutation and methylation data from the blood test, along with the patient's age and gender were analyzed against the colonoscopy results and used to derive the performance of the FirstSight test.

“We know colorectal cancer is among the most preventable cancers when detected early, yet there are more than 50,000 colorectal cancer deaths in the United States per year,” said Atul Sharan, co-founder and CEO of CellMax Life. “This can be prevented by having a noninvasive test that can effectively detect precancerous adenomas and have high compliance, ideally for both screening and in patients with previous polypectomy who are under surveillance.”

More than one-third of the eligible 112 million Americans in the 50-75 age group have never been tested or are not up to date. Lack of compliance with the recommended surveillance intervals after polypectomy is also a significant contributor to CRC incidence, especially in patients after removal of numerous or large adenomas, or adenomas with high-risk features.

About CellMax Life
CellMax Life is a diagnostics company focused on cancer screening with proprietary technology for detecting precancer and cancer cells, and genomic markers in a single blood sample. CellMax Life is headquartered in Sunnyvale, California, and has a CLIA certified and CAP accredited laboratory at this location. For more information, visit http://www.cellmaxlife.com.

Significant Association of FirstSight Score with Polyp Size and Number