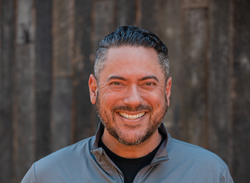 “Central Bark is coming off another great year ... with untapped markets that are ripe for development, Tim’s proven track record will position us to capitalize on our momentum with the right new franchise partners. We are excited to have him our our team!”

Weiderhoft comes to Central Bark from his role as CEO of Wow Wow Hawaiian Lemonade Franchising (Wow Wow), a premiere gourmet lemonade franchise, where he oversaw a brand with nearly 20 locations spread across the U.S. and two overseas. During his tenure, he took Wow Wow from a regional player in the industry to an emerging national leader in the vertical, even garnering coveted rankings among Fast Casual’s “10 Fast Casuals to Watch in the Post-Covid Era” and a spot in QSR’s “The 40/40 List: America’s Hottest Startup Fast Casuals.” Prior to Wow Wow, he served as vice president of franchise development and regional vice president of operations for Massage Envy where he helped the respected, national lifestyle brand expand to nearly 1,200 locations. Earlier in his career, Weiderhoft was a director of field operations for Massage Envy and a district manager for FedEx Office where he held full profit and loss responsibility for 20 locations and was ranked among the top five in the nation for overall sales growth.

“I have a deep appreciation for Central Bark’s mission to forever nurture, enrich, and inspire whole health, happiness, and unconditional love for each dog, family, and community we serve,” said Weiderhoft. “From the moment I first stepped into a Central Bark and met the team, I knew there was something different and special about the brand. Joining a franchise system that is rooted in the fundamental idea that our four-legged best friends deserve superb care is something that just hit me in my core. As a dog owner myself, I am acutely aware that Central Bark is the absolute best place for our dogs to get all the love, attention, and activity they need to be healthy, happy, and well-rounded members of the family. I look forward to helping recruit, select and qualify even more new franchisees across our system while working with the Central Bark team and our existing franchisees to ensure we are delivering the absolute best in whole dog care to as many dogs as possible. We are poised for some explosive growth ahead.”

“Tim comes to us with an extensive background in franchise development, sales, and brand management,” said Bob Crawford, CEO of Central Bark. “Central Bark is coming off another year of double-digit sales growth, multiple new territory expansions, and increasing demand for dog care in the $123+ billion pet care space. With room for growth in our existing markets and untapped markets that are ripe for development, Tim’s proven track record of building relationships that drive performance will position Central Bark to capitalize on our momentum with the right new franchise partners. We are excited to have him on our team!”

The Central Bark franchise system was founded in 2003 and now operates under the name Barkley Ventures Franchising, LLC. For nearly 20 years, the brand has grown to nearly 40 locations across more than a dozen states. The company has hosted over two million dog visits. Central Bark is a VetFran participant, in the International Franchise Association’s (IFA) veteran program, and offers a franchise fee discount to qualifying veterans. Central Bark is also an IFA MinorityFran participant. For more information about franchising with Central Bark, visit centralbarkusa.com/franchising or call 866-799-2275.