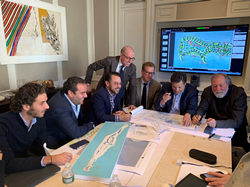 “At Thor, our strategy is driven by macro-economic and geopolitical themes and trends. As those change, we adjust. That’s why we shifted gears 10 years ago to become a big player in technology and creative office.”

When Joseph Sitt was young, his favorite character was Thor. While Thor protected mankind and cities from monsters and demons, Joe envisioned himself as a protector of cities from urban blight. Thus, Thor Equities Group was born in 1986 and so began Joe's journey from college student to property mogul.

Over the past three decades, Thor Equities has grown to become a titan in the global institutional real estate industry with divisions currently spread across three continents and a focus on subniche asset classes.

The company now has over US$20 billion assets under management and more than 50 million square feet in the pipeline. In fact, it’s fair to say that Thor Equities exudes the same strength and power as its namesake.

The company is known for being a pioneer in new markets – discovering emerging neighborhoods and often early in seeing opportunities across all asset classes.

Thor was the first institutional investor to lock down space by pioneering what are now some of the trendiest neighborhoods in the Western Hemisphere: initially Brooklyn’s Downtown and Manhattan’s Meatpacking District. The company also became the biggest landlord on SoHo’s fashionable side streets before the competition set in, as well as one of the first to secure space in Miami’s artsy Wynwood neighborhood and Chicago’s booming tech-focused Fulton Market.

Presently, with assets in almost every emerging market around the globe, Thor operates in nearly all major US and European cities, as well as Mexico, Russia and Belize. It employs more than 400 people across its offices in New York City, Mexico City, London, Paris, Houston, Miami and Chicago.

Each market is led by experts with deep knowledge in the diverse set of asset classes the company focuses on, including technology and creative offices, biotechnology and life sciences, logistics, hospitality and mixed-use retail, with a clear majority of the aforementioned assets being outside of New York City.

Reflecting on Thor Equities’ success and global presence, one should attribute it primarily to the talent Thor attracts and the firm’s ability to recognize market trends early. While these two factors are undeniable contributors to the company’s prosperity, Thor is most respected for its sense of timing – expertly executing a strategy of selling prime assets before down cycles.

Blending Joe’s passion to preserve the past with his ability to create experience-packed destinations, Thor has become a leader in investing in and restoring iconic luxury assets around the globe, including Chicago’s esteemed, nearly 150-year-old, Palmer House Hilton; the 200-year-old Burlington Arcade in London; the 111-year-old Phelan Building in San Francisco; and the Masaryk portfolio in Mexico City.

While Thor’s triumphs outweigh its tribulations, the company is no stranger to the struggling retail scene. Having recently made headlines for loan issues on three properties in Manhattan, those familiar with the New York City real estate scene know the company always manages to come away unscathed.

Guided by Joe’s vision, the company is now the largest developer in Mexico, with Thor Urbana boasting 18 million square feet in the pipeline across eight states in Mexico spanning various asset classes.

Perhaps the most notable developments in Latin America include Thor-owned and developed hotels and residences: The Montage Los Cabos; Ritz Carlton Mexico City; Thompson Playa del Carmen; and Four Seasons Caye Chapel, a 260-acre island off the coast of Belize.

Before the company was developing major projects in Mexico and acquiring assets across Europe, Joe was manifesting his plans from Brooklyn, New York, where he was born and raised.

His passion for real estate came to fruition while studying business at New York University’s Stern School of Business and it was during his college career that he purchased his first investment property, a small block on East Tremont Avenue in the Bronx.

He soon added a property to his portfolio, a 388,000-square-foot industrial development in Dayton, New Jersey, which he pre-leased to a manufacturing company – undoubtedly his impetus for re-entry to acquiring and developing logistics properties today. After graduating from university, Joe achieved status as a “serial retail entrepreneur”.

At the age of 25, he identified a gap in the apparel market for urban consumers, specifically urban career women, and launched his own women’s clothing company. Founded in 1991, plus-size fashion chain Ashley Stewart was a huge success and, under Joe’s stewardship, quickly grew to more than 400 stores across the US.

In 2000, Joe turned his attention back to expanding Thor Equities beyond the initial Bronx enterprise and entered into major metropolitan cities throughout the US.

While retail was Joe’s original focus for Thor Equities, in 2006 the company strategy pivoted into knowledge-economy technology and creative tenant office buildings, logistics, hotels and residential spaces. Eventually, Joe sold his remaining interest in Ashley Stewart to allow him to focus exclusively on Thor Equities.

“Joe is a talented real estate entrepreneur who sees opportunities and captures them with incredible energy.” – Jonathan Gray, president and COO, Blackstone.

Often referred to as Joe’s “chargée d’affaires”, Melissa demonstrates incredible leadership and has been an instrumental part of Thor’s success and growth. “It’s been so rewarding to play a role in growing a passionate team internally and watching them advance and celebrate their successes and promotions as they climb the ranks,” she says.

Melissa believes a great leader instills confidence in a team and makes them work at the edge of their core competency. “If you don’t do this, they don’t grow their knowledge base and the company won’t be as strong,” she says.

“Great leadership comes from the ability to trust a team and let them take chances. I’ve been lucky to work with Joe, who has given me, now as COO, the room to take risks and make mistakes.”

While Thor Equities tries to stay one step ahead of the market, the company’s key to success is its ability to seize opportunities quickly. Joe’s entrepreneurial nature permeates the company and motivates everyone to hustle.

“I’ve known Joe for many years and have always been impressed with his intellect and curiosity. He has built an amazing organization, taking advantage of opportunities in far-reaching markets and in a variety of categories of real estate that few executives could imitate. He has always been tough, yet fair, and honorable. He has also delivered on his commitments and been a person that I could depend on.” – Barry Gosin, CEO, Newmark Group.

“We try to find opportunities before anyone else. We look for growth opportunities and leverage on those tailwinds to support our investments,” Joe remarks. “At Thor, we work hard to deliver returns to our investors. People talk about strategy drift if you move away from doing one specific thing, but we see it differently. Our strategy is driven by macro-economic and geopolitical themes and trends. As those change, we adjust. That’s why we shifted gears 10 years ago to become a big player in technology and creative office.”

In early August, the company formally announced its newest division, Thor Sciences. While Thor was an early advocate in the sector, having picked up properties over the past three years outside of Berkeley and Boston, it made its official public debut with the acquisition of a life sciences campus outside of New York City.

Totaling nearly 1 million square feet of laboratory research and development space, it was an instrumental acquisition in the building of Thor’s global platform.

Given the company is often ahead of the curve and early in identifying opportunities for growth, the future is looking bright for Thor. The biggest players in the global real estate industry are no doubt eagerly anticipating Thor’s next move.

While there’s no doubt Joe has made a name for himself in New York City as an entrepreneur, he’s also well known for his philanthropic efforts. He’s a board member of many community organizations throughout the city, including the Bedford Stuyvesant Restoration Corporation, the nation’s first African–American community organization.

Additionally, he is President and Founder of the SHM Museum, which, among other things, manages the restoration and preservation of archaeological sites in the Arab world.

Joe is also the Chair and Founder of the Global Gateway Alliance (GGA), a not-for-profit organization that aims to address the challenges facing the New York and New Jersey regions’ ageing airport system and related infrastructure.

He began this initiative in 2008 and, in 2012, Joe donated US$2 million to establish the GGA venture, with the goal of bringing the airports into the 21st century. As a result of this 10-year effort, the MTA, city and state of New York announced a US$13 billion investment in New York’s three airports.

Passionate about education and sharing his knowledge with others, Joe is a regular lecturer at Columbia Graduate School, NYU, and University of Notre Dame on topics including entrepreneurship, geopolitics affecting business and urban real estate development.

He is also in high demand as an interviewee for primetime geopolitical news bulletins and acts as an adviser to CEOs in the technology industry. Capitalizing on his experience, Joe is able to guide executives in selecting locations to expand their businesses and outreach by identifying and investing in the markets they need to be in to fulfill their office and logistics requirements.

“Joe’s investment partners benefit immensely from his broad wealth of knowledge, both at a macro level and city specific. He understands the cultural differences of the various markets where he invests, and his substantial market intelligence translates into his team’s ability to identify great locations in emerging neighborhoods – allowing them to be at the forefront of the latest trends. Joe takes immense pride in relationships with his partners and he is a tremendous resource for PSP Investments.” – Neil Cunningham, President and CEO, PSP Investments.

Partnering for success
The team at Thor Equities prides itself on building strong relationships with its global business partners. “I have known Joe for many years and have always been impressed with his intellect and curiosity,” Newmark Group CEO Barry Gosin says. “He has built an amazing organization, taking advantage of opportunities in far-reaching markets and in a variety of categories of real estate that few executives could imitate. He has always been tough, yet fair and honorable. He has also delivered on his commitments and has been a person that I could depend on.”

Neil Cunningham, President and CEO of PSP Investments, adds: “Joseph’s investment partners benefit immensely from his broad wealth of knowledge, both at a macro level and city specific. He understands the cultural differences of the various markets where he invests, whether it be in Europe, the U.S. or Mexico. This substantial market intelligence translates into his team’s ability to identify great locations in emerging neighborhoods – allowing them to be at the forefront of the latest trends. Joseph takes immense pride in relationships with his partners and he is a tremendous resource for PSP Investments.”

Jonathan Gray, President and CEO of Blackstone, also speaks highly of Joe: “He is a talented real estate entrepreneur who sees opportunities and captures them with incredible energy.”