CERBAIR has recently undisclosed a manportable system that includes both the detector and the effector. Named Chimera, it is a considerable add-on to the company portfolio. 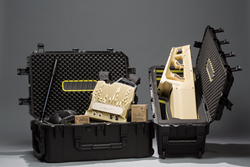 All in one C-UAS system by CERBAIR

“In a degraded combat environment, slowed down by heavy equipment and shaken by an emotional overload, we can’t expect to reliably detect a drone on time. Therefore, simplification and centralization of CHIMERA’s decision-making give the operator a glimpse of the direct tactical outcomes

Genesis of the CHIMERA project

Against the threat caused by malevolent drones, very little resistance is being opposed. There is a strong asymmetry between drones and conventional anti-air defense systems.

These multi-million dollars investments rely on kinetic means of neutralization, making them unsuited for rural environments. They are inadequate for this fight. Therefore, an anti-drone defense system should replicate the factors which make civilian UAV plausible threats: mobility, portability, ease of use and cost-efficiency.

Project development
The CHIMERA solution is composed with 3 connected hardware items: an antenna, located in the dedicated backpack, a digital C2 (Command and Control) tablet attached to the front of the tactical vest, and an effector.
By the omnidirectional analysis of the surrounding radiofrequency spectrum CHIMERA processes the DETECTION stage. This method allows to visualize the packets of information within the wireless communication link, shared between the drone and its operator. Compared to our empirically developed database, they are key indicators which allow to identify unique UAV RF signatures.

Unlike the HYDRA solution, the mono-sensor configuration doesn’t allow for a TDOA (Time Difference Of Arrival) localization. As soon as the alarm goes out, displayed on the digital tablet, the LOCALIZATION of the drone and its pilot are done manually, using the directional antenna.

Once the rogue drone is confirmed, NEUTRALIZATION can be operated by emitting an electromagnetic impulse. At BVLOS (Beyond Visual Line of Sight) distances, the operator keeps the threat outside of his tactical safety area.

Thus, CHIMERA’s architecture allows the operator to limit the threat neutralization process to 3 steps, using a portable and mobile system:

CHIMERA differentiate itself from conventional anti-drone rifles, from which the absence of sensors leave to the user the task of detecting the UAV. “In a degraded combat environment, slowed down by heavy equipment and shaken by an emotional overload, we can’t expect to reliably detect a drone on time” says Lucas Le Bell, CERBAIR’s CEO. “Therefore, simplification and centralization of CHIMERA’s decision-making give the operator a glimpse of the direct tactical outcomes” he adds.

In 2018, the decision to rely on the HYDRA detection module’s technology was taken. From this point onwards, four key steps can be identified:

Therefore, CHIMERA is the result of a dynamic iteration combining CERBAIR’s expertise in anti-drone solutions and external solicitations. Based on years of hard work, CHIMERA is the first to combine detection, localization and neutralization in the same portable hardware base.

About CERBAIR: created in 2015, CERBAIR is trusted by major corporate and institutional entities, such the Ministry of Defence, Interior, and Justice. We recently cooperated with the French Police elite force during the G7 Biarritz Convention or more recently during the Med 7 in Corsica. Distinguished by EIT Digital as one of the most innovative and promising “scale-up”, CERBAIR was awarded the first place in the “Digital Cities” category during the EIT Digital Challenge.