Certiport, a Pearson VUE business, today announced that it has renewed the contract to deliver the Adobe Certified Associate program (ACA), via its global network of Certiport Authorized Testing Centers, with Adobe Systems Incorporated. 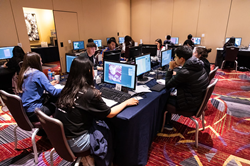 “Over the last decade, the Adobe Certified Associate program has attracted over a million candidates and helped launch careers in digital media all around the globe. Certiport has been instrumental in driving this success.” Tacy Trowbridge, Head of Global Education Programs, Adobe.

Certiport (http://www.certiport.com), a Pearson VUE business, today announced that it has renewed the contract to deliver the Adobe Certified Associate program (ACA), via its global network of Certiport Authorized Testing Centers, with Adobe Systems Incorporated.

Under the agreement, Certiport will continue to provide its full-service model, which includes exam development and maintenance, marketing and sales, as well as customer support. The ACA exams are offered in 13 different languages and there are over 15,000 Certiport Authorized Testing Centers in 148 countries.

“We are thrilled with the success of the Adobe Certified Associate program, which through joint effort with Certiport, has awarded a total of one million ACA certifications as of 2019. This milestone showcases the huge appeal of getting globally recognized credentials for advanced Adobe software skills,” commented Ray Murray, Vice President and General Manager, Pearson VUE.

Certiport will also host the Adobe Certified Associate (ACA) World Championship, which will be held in Orlando, FL in August 2021. Certiport had to cancel the 2020 ACA World Championship due to the difficulties resulting from the COVID-19 pandemic and the current travel and large group event restrictions. In 2019, the event attracted 50 competitors from 27 countries. To enter the competition, students aged 13 to 22 must take a qualifying ACA certification exam. For further details see https://www.acachampionship.com.

Certiport is the leading provider of learning curriculum, practice tests, and performance-based IT certification exams that accelerate academic and career opportunities for learners. Certiport provides certification development, delivery and program management services through an expansive network of over 15,000 Certiport Authorized Testing Centers in 148 countries. More than 3 million Certiport exams are delivered in 26 languages across 148 countries each year throughout the academic, workforce, and corporate technology markets. Certiport is a Pearson VUE business, and is part of the world’s leading learning company, Pearson. To learn more, go to certiport.pearsonvue.com (http://certiport.pearsonvue.com).