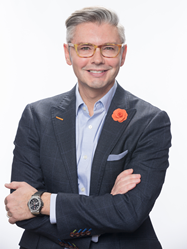 “The intent of this new global role is to help ensure that we have a consistent strategic direction across the whole organization, with the added benefit of leveraging the best ideas and financing arrangements for implementation,” said City Electric Supply CEO Thomas Hartland-Mackie.

City Electric Supply (CES) CFO Phil Flaherty joined the company over 30 years ago. Today, CES is proud to announce that he will be taking on the new position of Global Chief Financial Officer. In his new role, Flaherty will oversee the US and UK accounting teams while growing and evolving the financial strategy across the entire company.

“Phil has been with City Electric Supply for over 30 years. We hope to leverage his knowledge and experience, as well as his familiarity with the company, to position ourselves strategically,” said City Electric Supply CEO Thomas Hartland-Mackie. “We are continuously seeking ways to gain more market share globally, and the pandemic has certainly shown us that a strategic global perspective is more important now than ever.”

Hartland-Mackie went on to explain how, through his new position, Flaherty will continue to help grow and evolve the Dallas-based company.

“The intent of this new global role is to help ensure that we have a consistent strategic direction across the whole organization, with the added benefit of leveraging the best ideas and financing arrangements for implementation,” Hartland-Mackie said. “Increased collaboration across our accounting teams will also allow us to be more efficient as our teams share skills, knowledge, and key learnings with each other.”

Though Flaherty started his career with CES in 1988 and has achieved great success for the company throughout the years, he says this is just the beginning.

“We will build upon the existing successes,” said Flaherty. “In time, we’ll look for ways we can continue to grow and stay relevant with the digitalization of accounting practices and leveraging technology for increased efficiency.”

And as CES continues to grow and elevate, the focus will continue to be on the company’s over 1,000 branches worldwide, on a local level.

“One of our continued priorities will be to support the commercial teams and branches,” added Flaherty. “As I work with our local teams all around the world, I believe we can harness the best practices and ideas to implement within our organization.”

It has been quite the adventure for the now Global CFO of City Electric Supply. He took on his first position with CES at the age of 17 in the Isle of Man.

“I truly started at the very bottom of the business,” he said. “As an office assistant, I filed paperwork and made tea — and I wasn’t very good at filing paperwork.”

Shortly after taking on that position, Flaherty was offered the opportunity to enter the management training program in England.

“If I would not have taken that leap into the program, I wouldn’t be in Dallas today,” Flaherty said.

That might be true as it did not take long after entering the program for Flaherty to become a manager in the accounting department in Warwickshire, England. He was later given another opportunity that would take him to Canada.

“I was sent to Canada for a purpose. The finance department was all over the place. At just 22 years old, they sent me to go clean it up,” he said. “When I first got there, it forced me into an uncomfortable position. When I was in the UK, I understood how things were done, but in Canada, I had to take charge of things. In turn, that led me to keep an open mind to doing things differently. But I recall that I also had my fair share of mistakes during that time and I learned from these, too.”

His long journey that led to his current position as Global CFO will help make Flaherty a team leader who has truly done it all.

“I’m never going to ask someone to do something I’m not prepared to do myself,” Flaherty said. “And because I started at the bottom and worked my way up, there’s not a lot I haven’t done, so that helps. “

And as he takes on this new role in the midst of the pandemic, Flaherty can’t help but recall another challenging time he’s experienced, the 2008 recession.

“In 2008 and 2009, keeping the branches going was a primary focus to ensure we survived through those difficult years,” he said. “What we learned from that recession definitely prepared us for the economic impact we felt in early in 2020. As the world changed overnight, we had to adapt quickly and we applied some of those same lessons from the 2008 Recession.”

City Electric Supply strongly believes in promoting from within. It has proved that time and time again through countless promotions and training opportunities. Flaherty believes that CES provides individuals with tools to grow within the company, if they choose to use them. His story is one of many success stories within CES.

“For me, when I look at the opportunities presented to me, it says a lot about CES and the principles of the Mackie family,” Flaherty said. “CES offers opportunities based on a person’s proven track record and individual skills and does not limit their opportunities due to not going to the right school or knowing the right person. CES sees the whole picture of a person and doesn’t limit them if they are shown capable of doing the job.”

Flaherty looks forward to offering the same type of opportunities that he himself has received.

“I can say that it’s been a privilege bringing people into the business and watching them grow,” he said. “My big goal is to build strong teams. I enjoy working with people and learning from the people I work with. With this new spirit of cooperation between the US, Canada, and the UK, we’ll all be learning new things.”

City Electric Supply (CES) is a family-owned electrical wholesale distributor headquartered in Dallas, Texas. The company was founded in 1951 by Tom Mackie in the United Kingdom and expanded to the United States in 1983. Today, CES employs more than 3,000 people in over 500 branches across the U.S.