In this 20th anniversary year of China’s accession to the WTO, President Xi said China has kept its promise to lower tariff barriers. 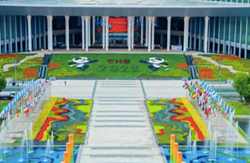 China has vowed to open the world’s second largest economy even wider, pledging to expand imports and “pursue balanced development of trade.”

Chinese President Xi Jinping called on the international community to advance economic globalization and reject protectionism. “We will not change our resolve to open wider at a high standard,” Xi said in his keynote speech via video to the fourth annual China International Import Expo (CIIE) underway from November 5 to 10 in Shanghai. Expressing China’s determination to “share development opportunities with the rest of the world,” Xi said: “We will not change our commitment to an economic globalization that is more open, inclusive and beneficial for all.”

China pledged to open its markets when it joined the World Trade Organization (WTO) in December 2001. In this 20th anniversary year of China’s accession to the WTO, President Xi said China has kept its promise to lower tariff barriers. “Its overall tariff rate has been cut from 15.3 percent to 7.4 percent, lower than the 9.8 percent accession commitment,” he said.

Over the past two decades, China has grown from the world’s sixth largest economy to the world’s second largest, benefitting its trading partners in the process. Exports and imports expanded in double digits in the first nine months of 2021, surging 22.7 percent and 22.6 percent, respectively, year on year.

Xi’s CIIE keynote speech underscored China’s longstanding commitment to mutual benefit in global trade. “China stands ready to work with all countries to build an open world economy, so that the spring breeze of openness will bring warmth to all parts of the world,” he said.

To read more about “China Vows to Open its Economy Wider”, click on this link: https://news.cgtn.com/news/2021-11-04/Xi-Jinping-addresses-opening-ceremony-of-CIIE-14V5bYl3lny/index.html

This material is distributed by MediaLinks TV, LLC on behalf of CCTV. Additional information is available at the Department of Justice, Washington, D.C.