By some estimates, making all of the Navajo people safe “will take 100 years.” 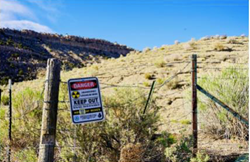 There are over 520 abandoned uranium mines in Navajo nation. Some mines have signs to warn people, but some even have no signs at all.

On hot summer days as a child, Hood and her three siblings cooled off in water spilling from a pipe – not knowing it was radioactive wastewater. As an adult, she mined uranium. In 2006, doctors diagnosed her with lymphoma, a form of cancer.

This material is distributed by MediaLinks TV, LLC on behalf of CCTV. Additional information is available at the Department of Justice, Washington, D.C.

You could say the nuclear age began on Navajo Nation lands. The uranium mined here supplied America’s first atomic bombs. On July 16, 1945 – the day of the world’s first-ever nuclear blast, code-named “Trinity” – the Navajo were among the tribal nations downwind of the fallout. Decades later, on the exact same day, July 16, the worst nuclear spill in U.S. history occurred at Church Rock, New Mexico on this reservation.

The Navajo people helped give birth to the nuclear age. Seventy-five years after Trinity, they are still paying a heavy price for it. CGTN America went to the Navajo Nation where correspondent Xu Dezhi met tribal member Edith Hood who embodies her nation’s tragic nuclear legacy. On hot summer days as a child, Hood and her three siblings cooled off in water spilling from a pipe – not knowing it was radioactive wastewater. As an adult, she mined uranium. In 2006, doctors diagnosed her with lymphoma, a form of cancer.

Among Navajo living near uranium deposits and mills, doctors have documented stomach cancer rates 200 times higher than the average for U.S. women between the ages of 20 and 40.

Edith Hood’s niece, Angie, moved her family from their home near one of the contaminated sites. But the uranium is hard to escape. One study found uranium dust in 85 percent of homes tested for its presence. Everyone in those homes had uranium in their bodies.

According to the U.S. Environment Protection Agency, there are more than 520 abandoned uranium mines (AUMs) on lands the Navajo consider sacred. This year, the EPA awarded contracts worth $220 million to clean up just 50 of them. As CGTN America reports, AUMs will remain a curse for generations to come. By some estimates, making all of them safe “will take 100 years.”

For now, Hood and many of her fellow Navajo face a difficult choice: stay and preserve a way of life or save lives by moving from homes on a starkly beautiful, but contaminated landscape.