Friendship, confidence, and progress key to the Frenchman’s decision 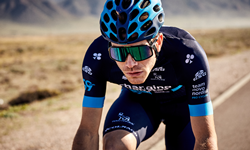 After turning pro in 2014, Planet has earned multiple milestones for the team including securing the team’s first WorldTour jersey with the Most Active Rider jersey at the Tour de Pologne in 2019.

“I look forward to making even more progress with the team and our mission to inspire, educate and empower people affected by diabetes. I’m really excited for the future and what we can achieve together," said Planet.

Team Novo Nordisk confirmed Tuesday the extension of 26-year-old puncheur Charles Planet. The Frenchman committed to the world’s first all-diabetes professional cycling team for the next three years, taking his contract through 2023.

“I feel at home in this team. Over the years, they have seen me progress and I’m really proud of what we’ve achieved together,” said Planet. “What’s even more exciting is that we’re getting better and better and that is why this is where I want to stay for the next three years.”

After turning pro in 2014, Planet has earned multiple milestones for the team including securing the team’s first WorldTour jersey with the Most Active Rider jersey at the Tour de Pologne in 2019.

“I started my professional career with Team Novo Nordisk, and it’s been an amazing journey. I was 18 years old when I joined and had very little experience on the road,” explained Planet. “I look forward to making even more progress with the team and our mission to inspire, educate and empower people affected by diabetes. I’m really excited for the future and what we can achieve together.”

After what was set to be a promising 2020 season was stopped in its tracks with the Covid-19 outbreak and subsequent suspension of sporting activities. However, Planet did not lose focus and as the season re-started in August, he returned to action with top ten results at Circuito de Getxco and the Tour de Slovaquie and a hard-fought top 30 at an epic edition of Paris-Tours.

“Charles has made solid progress over the years. Even with a very complicated and short 2020 season, he was on the top of his game at basically all the races he did this year,” said Team Novo Nordisk General Manager Vassili Davidenko. “He has shown strong character and leadership. The team is always there to support Charles and importantly for both the team and for Charles, he feels at home.”

Diagnosed with type 1 diabetes when he was 10 years old, Planet echoes and elaborates on that sentiment and says the benefits of the supportive environment at Team Novo Nordisk are conducive to physical progress and emotional and mental development.

“To have good legs, you need to be good mentally. It allows me to train well and be there in the races. In this team, we have a good atmosphere between all the riders and staff, which is nice. It makes a big difference when everyone is laughing at the dinner table and getting along; that’s really important to me,” said Planet.

With the next few years secured thanks to the continued support from title sponsor Novo Nordisk, Planet and Team Novo Nordisk can look ahead to future objectives.

“The plans for Charles’ preparation over the off-season are already confirmed and will include some off-road racing,” concluded Davidenko. “Charles has earned his position as one of our leaders at Team Novo Nordisk and I am sure he will continue his growth over the wintertime and he will be ready for more great accomplishments in 2021.”

Looking ahead to what is currently a relatively unknown 2021 season, Planet is hoping to start to transition from breakaway star into more of a contender.

“Over the years, I’ve been in a lot of breakaways and I like that but now it’s time to start focusing on results for the team at races that suit me well,” said Planet. “In cycling, confidence is critical. Now I feel I have more confidence in myself. When I tell my teammates that I am feel good, we all work for one goal and I appreciate them. That’s what makes cycling so special, the teamwork.”