For Marshall Thompson, 79, this year has been the culmination of three-quarters of a century of an incredible life and career that has exceeded way beyond his dreams. Receiving a Star on the Hollywood Walk of Fame and seeing his beloved Chi-Lites being recognized this past September truly felt to Marshall that Christmas came extra early this year. 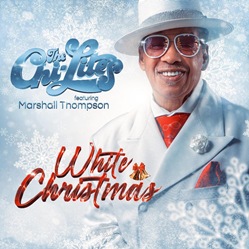 “I did it for my Dad,” said Thompson, the Godfather of Vocal Groups. He played this song for my sisters and brother every year at our house during the holidays. William “Nose” Thompson was a keyboard player that toured and performed with the greats like Louis Armstrong. He inspired my love of writing and performing music and playing live for audiences.

“I always loved the song “White Christmas,” and by coincidence, it was written in 1942, the very year I was born. I remember hearing it every year as I was growing up. My overwhelming feeling of gratitude for my family and loved ones and all of those who helped me personally and professionally over the decades, is what propelled me to record this song now, rather than wait another year,” explains Marshall.

"Sadly last year, due to the pandemic, too many people were separated from their families. My wish for this holiday season is that families and friends will be able to celebrate safely with their loved ones. I truly hope this recording will touch a lot of hearts,” Marshall said.

Early responses from influencers, program directors and, on-air personalities indicate the Chi-Lites featuring Marshall Thompson’s White Christmas will be added to many Playlists this Holiday 2021. “Marshall Thompson’s White Christmas is an instant standard! It makes me feel like Christmas when I was a little boy - - the toys, the love, and the warmth. That’s what Christmas is all about,” reports the popular nationally syndicated radio personality Jeff Foxx, Host of Soul Town on Sirius/xm on Ch. 49.

It started in 1959 when Marshall Thompson formed a vocal group called the “Hi-Lights” in his hometown of Chicago with fellow members Eugene Record, Robert Lester, and Creadel “Red” Jones. After releasing several singles on local labels, the group changed their name in 1964 to “Marshall & the Chi-Lites.” By the time the group changed their name to the Chi-Lites in 1969 they were signed by Nat Tarnopol and Carl Davis to Brunswick Records where they would soon become international superstars.

Between 1969 and 1974, the Chi-Lites scored eleven top ten singles on the Billboard R&B charts with hits like “Have You Seen Her,” “Give It Away,” “Give More Power To The People,” “Are You My Woman,” “A Letter To Myself,” “The Coldest Days of My Life,” “Stoned Out Of My Mind,” “Oh Girl” and thirty-seven other Billboard charted singles throughout their career. During the 1970s the Chi-Lites were featured multiple times on national shows such as Soul Train and the very popular Flip Wilson Show where they debuted their #1 pop smash “Oh Girl.”

In 2000, BMI named “Oh Girl” by the Chi-Lites the 36th most popular song of the 20th century. That same year, the Chi-Lites were inducted into the Rhythm & Blues Hall of Fame. More recently, the Chi-Lites have been featured in films such as the 1996 “Original Gangsters” with Fred Williams, Jim Brown, Pam Grier, and Richard Roundtree as well as the 2003 docu/movie "Only The Strong Survive" by Miramax films. In 2014, while on the Soul Train Cruise, Thompson suffered a stroke after a performance with The Chi-Lites. Despite his limitations from the stoke, Thompson continues to record, perform and promote the Chi-Lites with the same drive he had in the 1970s.

Grammy-winning audio engineer Bruce Swedien insists that when he recorded Michael Jackson’s vocals for the “Off The Wall” and “Thriller” albums, he used the same techniques he developed with the Chi-Lites in the early 1970s. In addition to being featured in countless films, television shows, and commercials, the recordings of the Chi-Lites are sampled by today’s biggest artists such as Jay-Z, K. Michelle, American Idol winner Fantasia, and Beyonce, who sampled the Chi-Lites to create the Grammy-winning smash “Crazy In Love.” On September 30, 2021, Marshall Thompson received the ultimate honor of a star on the Hollywood Walk of Fame for the Chi-Lites.