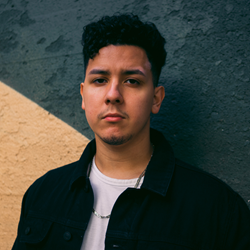 Life was no longer in the way of completing the project. The pandemic allowed me to reflect on my relationships, which the songs were mainly centered around.

Adam Martinez, the Chicago-born and raised singer, songwriter, and multi-instrumentalist releases “Come Back Home” off of upcoming sophomore EP, Things That Keep Me Up At Night, on Tuesday, Jan. 19. The sophomore EP available Feb. 12, is written, produced, and performed by Martinez and promises to establish him as a serious figure in the Chicago pop/R&B scene and beyond. The lead single, “Come Back Home,” tells of a jilted lover’s final attempts to salvage a doomed relationship. A music video will accompany “Come Back Home” at the end of the month.

“Come Back Home” tells the true story of a relationship turned bad, “I wrote it about a girl who was definitely indecisive and didn’t really know what she wanted, but the times we shared together were so good and so hard to let go of,” Adam admits. “Even though we weren’t broken up yet, somehow it already felt like she was gone, and that’s where the title ‘Come Back Home’ comes from.”

Born to a family of successful Chicago-based Mexican-American musicians, Adam Martinez has been writing and producing thousands of tracks over the last decade. Martinez has gained recognition from the likes of music giants MTV and Spotify. His latest EP had been in the making for a while when the COVID-19 pandemic hit, “Life was no longer in the way of completing the project. The pandemic allowed me to reflect on my relationships, which the songs were mainly centered around,” Adam shares.

Things That Keep Me Up At Night can be streamed everywhere on Feb. 12 and the “Come Back Home” music video will premiere on AdamMartinezMusic.com later this month.

Musical triple-threat Adam Martinez adeptly holds the titles of singer, songwriter, and producer all before the age of 25. Adam was born with music in his DNA: His Mexican-American family includes famed Chicago Latino musicians whose contributions are ingrained in the city’s cultural history. The genetic makeup of his smooth sound is comprised of eclectic musical genres across the spectrum from Motown and R&B to Latin and pop. He draws inspiration from influential artists like Selena and Bruno Mars, and fans have described previous tracks as a cross between Shawn Mendes and Charlie Puth.

Now armed with an arsenal of unreleased tracks, he’s eager to continue showcasing his ability to create music that begs for repeat listens, starting with his latest EP, Things That Keep Me Up At Night.

Adam has garnered millions of votes for MTV’s Cover of The Month Challenge (for his cover of Mike Posner’s “I Took A Pill In Ibiza”), and has had placements on Spotify’s New Music Friday Latin & Radar Latino playlists in the past year.